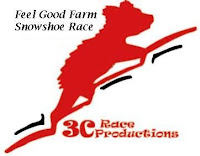 Race # 2 in the Granite State Snowshoe Series was held yesterday at Feel Good Farm in Lyndeborough, NH [results]. I’m considering filing a false advertizing complaint with the GSSS race committee. This race was nothing like its idyllic name implied. Four torturous climbs up and over 878 foot high Moose Mountain left me far from ‘feeling good’. The animals on the farm seemed happy though, especially the horse roaming around the open field parking lot prior to the start of the race.

I went out for a short warm up on the course with a few of my DRR teammates. I could see that the snow cover was minimal or non-existent in some spots. The warmer than usual temperatures over the past two days must have contributed to a significant amount of melt. When I got back to the parking lot I saw Steve and we went out for a warm up on the roads. Emily was just pulling into the farm as we were leaving. Late again!

The race started in an open field with about a 100 yard sprint to the single-track that entered into the woods. I was somewhere near the middle of the 116 person pack when we hit the woods. The course stared to climb up a small hill early on and then down a short, steep descent. Soon, we approached a rocky brook crossing which brought the train to a stop and backed things up a bit. After the brook, the real climbing began up Moose Mountain. 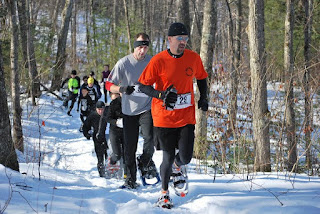 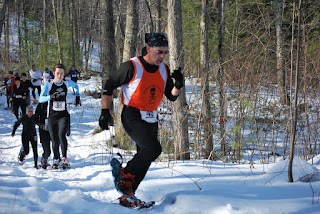 Still strong but not for long.

Most of the people around me were walking the hill. I was no exception. I could tell a few people behind me were better climbers so I pulled off trail to let them pass. Once cresting the hill there was a long, twisting descent down the backside of the mountain. This would have been a fun, fast descent had there been adequate snow cover. Unfortunately, the trail was almost completely bare and there were many exposed large rock and roots on the way down. It was hazardous going for shoers and snowshoes alike. More on that later.

After some more twisting single-track running in the valley, the course headed back up Moose Mountain from another direction. This climb was more deceptive the than the first. The first climb was almost a straight shot up the mountain. The second was more like, climb, turn a corner, climb again, turn another corner, and climb some more. I kept thinking, “When will this thing end?” Eventually it did and it was another dive down the mountain over more rocks and roots and then some flat running back to the start/finish area and out for loop number two. 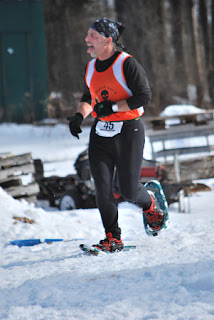 My version of 'flipping the bird' to RD Mike when he said I was looking good. He lies.

By the time I hit Moose Mountain for the third time I was completing drained. I was having a difficult time making any progress up the mountain. I mean more difficult than usual! I had bought some food with me to eat on the drive to the race but forgot to eat it. Duh! I think the lack of calories caught up to me and I was bonking. Who knew you could ‘hit the wall’ after 2 miles! Steve caught and passed me near the top of climb number three. I told him I was crashing hard and he offered some of his food and drink. Although I was in serious need of both I declined. Steve was having a good race and I didn’t want him to slow down and babysit me even if it was only for a couple of minutes.

Soon, Steve was long gone but the passing of me by others continued for the remainder of the second loop. I think I lost about 20 places in the last 1.5 miles. Emily was the last to pass me about ¼ mile from the finish line. She went by me with her usual smile and some words that I could not understand because my brain was completely drained of glycogen! I tried to hang on to her so I wouldn’t get passed anymore and it worked. I was very happy to cross the finish line. Very tired too! 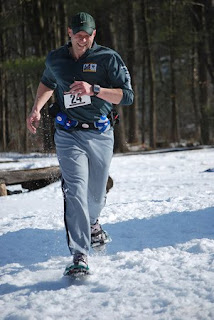 Steve finishes with a smile. 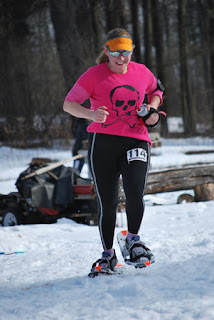 Emily is smiling too as she nears the finish. 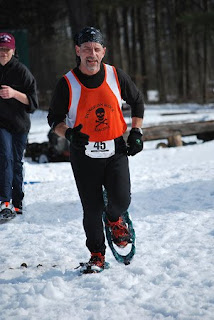 Unlike Steve and Emiliy, I cried when I saw the finish line.

After the race I noticed I had broken the toe cleats off both of my shoes and tore completely through one of the bindings. I think it happened on the first descent down the mountain when I hit a lot of rocks. I was having difficulty during the race getting traction on the climbs but thought it was due to fatigue. I’m sure the lack of cleats contributed to me slipping around. I don’t think the broken shoes made that much of a difference in the outcome of the race. It just wasn’t my day. 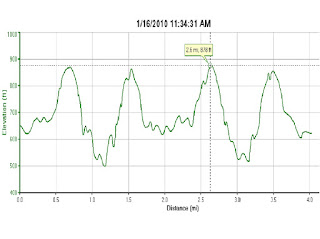 All photos in this post courtesy of Kristen Kozlosky. See all of her photos of the Feel Good Farm race here.

More photos of the race by Scott Mason.
Posted by Dan at 10:06 AM