The Western States Endurance Run is one of the oldest ultra trail events in the world and certainly one of the most challenging. It's the "Granddaddy" of ultras, the race every ultra runner aspires to run. Sort of like the Boston Marathon for serious road runners. The Run is conducted along the Western States Trail starting at Squaw Valley, California, and ending in Auburn, California, a total of 100 miles. Most of the trail passes through remote and rugged territory. The trail ascends from the Squaw Valley floor (elevation 6,200 feet) to Emigrant Pass (elevation 8,750 feet), a climb of 2,550 vertical feet in the first 4½ miles. From the pass, following the original trails used by the gold and silver miners of the 1850’s, runners travel west, climbing another 15,540 feet and descending 22,970 feet before reaching Auburn.

A few of my trail running friends will be toeing the starting line in about one hour.  I'll be checking in during the day (and night) to watch their progress. They are all mentally strong runners so I'm sure they'll do well.  I just hope the weather isn't insanely hot as the temperature in the canyons can rise to well over 100 degrees.  Running 100 miles in 100 degrees, there's something very wrong with that.  And to think I entered the the lottery to run this thing! What was I thinking?

Well, I went back to Breakheart this weekend to map out a route for the trail race I will be hosting in October.  My original plan was to have a 10 mile race using my standard 10 mile training loop.  No scoping out new trails, no measuring, no surprises, no additional race preparation. Simple right?  Wrong!  The park ranger at Breakheart wasn't keen to the idea of having runners on just about every trail in Breakheart. He wanted the race to be shorter, using less of the trail system. I agreed to make it a 10K.  Better a short race than no race at all.

I got to Breakheart about 10:30 this morning.  It was super humid and the insects were out in full force. I managed to map out a course approximately 6.2 miles long with a good mix of terrain.  There's the mandatory rocks and roots but also some pleasant stretches on pine needle covered trails.  Breakheart doesn't have any monster hills but what it has, I took full advantage of ;-).  I think it will make for an interesting race.

I'm currently working on developing a race website, taking photos of the course, writing a course description, contacting potential sponsors, lining up volunteers and a whole lot of other stuff.  Participating in a trail race is so much easier than organizing one!   I'll be posting updates in the coming weeks and will give you the link for the race website when it's ready.  For now, just reserve October 17, 2010 on your race calender.  I hope you'll join me then and make this race a success.

I was at Breakheart Reservation to meet with the park ranger about having a trail race there in the fall.  He was willing to allow a race even though it's a very busy time of year in the park.  He gave me two dates to work with, both which conflict with other North Shore trail races.  I really don't want to compete with other RDs in the area but I have to work with what I was given.  I'm filling out the permits and will see where it goes from there.  More to follow as this progresses.
Since I was already at the park I decided to take a short hike.  Once I entered the woods it occurred to me it was the first time I've been to Breakheart since I stopped running six weeks ago.  And how I've missed this place.  I walked for a little over two hours and covered about six miles.  I was a little worried about all the steep climbs and descents I was doing but my knee felt fine the whole time.   It's not running, but I'll take what I can get at this point.  Here are a few photos I took along the way. 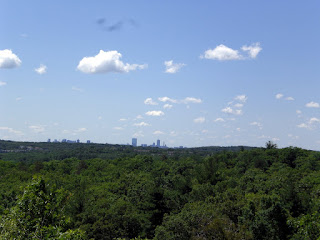 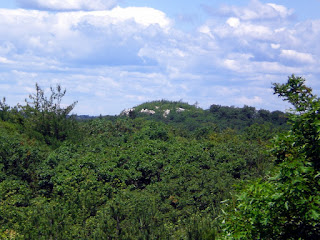 Castle Rock in the distance. Highest point in the reservation. 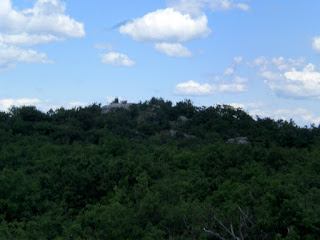 Another view from the ridge. 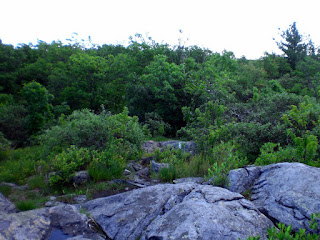 Traveling along the Ridge trail. 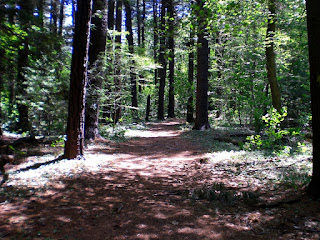 This is what I've missed. The pine needle covered highway. 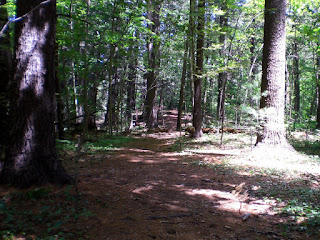 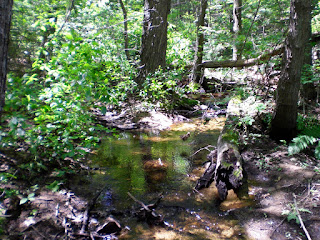