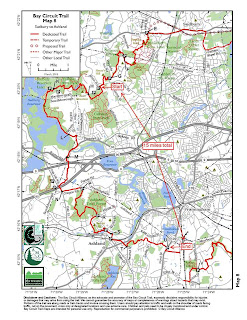 I completed my second section hike on the Bay Circuit Trail last week. This one took me from Edmands Road in Framingham to Route 126 in Ashland and covered 15.5 miles of deserted trails, quite back roads and brief spells over busy highways. The total of my two hikes is 25.5 miles. When combined with the 103 miles I ran in 2011, the total miles covered is 128 which is more the half the reported 200 mile length of BCT. This hike also took me south of Interstate 90 which in my mind was the mid-point of the trail.

After a short walk on Edmands Road the trail turned south into the Sudbury Valley Trustee's Welch Track. The trail was lined with impressive pines as it parallels an equally impressive field stone wall that acts as the boundary line for Callahan State Park. I entered Callahan though a break in the stone wall but could not see any blazes for the BCT. I think I walked too far into the the Welch Track before turning west into Callahan. I used my Mass State Parks phone app to determine my position and map a route back to the Red Tail Trail that was also the BCT route. (Is that considered cheating?) This was the only time I went off trail the entire day. How unusual is that? 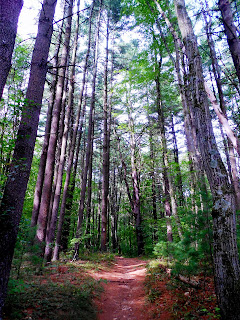 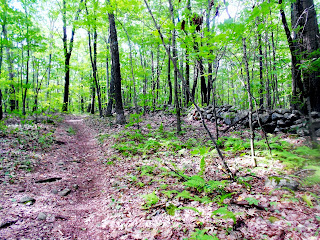 Wall at right is boundary line for Callahan State Park.


I crossed Edmands Road and reentered Callahan on the Backpacker's Trail for the climb up to Gibbs Mountain. Initially, I thought I would be climbing to the summit of Gibbs but the BCT merely skirts the flank of the mountain. I was tempted to take the side trail to the summit but decided not considering I had a very long day ahead of me. Instead, I headed down the mountain to the tranquil Beebe Pond. 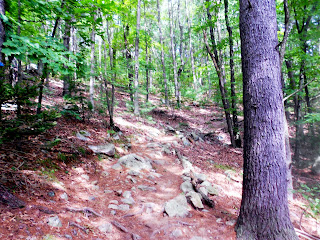 Starting the climb up Gibbs Mountain. 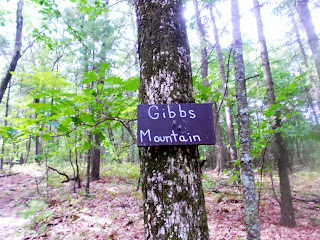 Trail on left goes to the summit.

Crossing the dam at Beebe Pond the trail winds uphill again on the Bear Paw Trail.  A large stone chimney stands directly on the trail near Beebe Pond. I have no idea what purpose it serves since there is nothing else nearby. I could not see evidence of an old foundation so I don't think there was ever a building there. I climbed the hill questioning the nearly complete lack of BCT blazing though Callahan. Sure, I was able to find my way relying solely on the written trail description but an occasional confidence blaze would have added to my piece of mind. 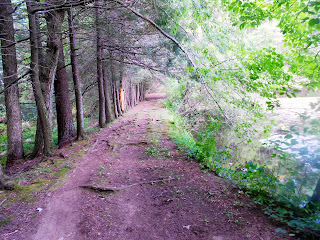 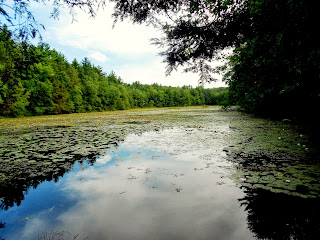 After traveling in a mostly westerly direction in Callahan, the BCT enters Sudbury Reservoir Land and turns south. After navigating my way over a few blow downs and through a short section of overgrown brush, the trail opened up onto a wide dirt road.  I followed this road for nearly two miles making good time on the flat surface. Occasionally, there would be an opening in the woods and I would catch a glimpse of the reservoir to my right. By now I was nearly out of water and becoming dehydrated due to the temperature being in the low 80's. I had no means of purification so all I could do is look at the expanse of reservoir water and keep on walking. 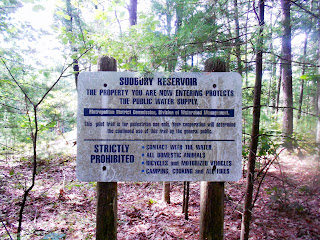 Water, water everywhere, nor any drop to drink. 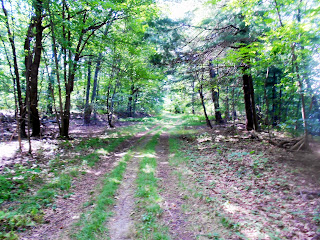 These first five miles were all off road but the next mile ahead of me would be on roads. This worked to my advantage as I was able to obtain a water refill from a man who was cleaning his car in his driveway. I asked if I may fill my water bottles from an outdoor facet but he kindly took them indoors to fill. Armed with 40 oz of liquid gold I moved forward to do battle with Route 30 traffic. Fortunately, it was just a brief skirmish and I soon retreated into the woods via a parking lot next to an abandoned store. 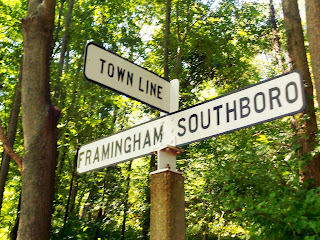 This road walk zig-zags the Framingham, Southborough and Ashland boarders. 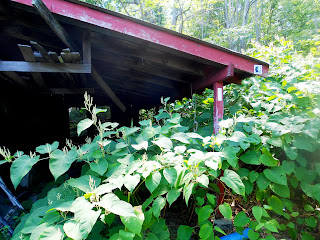 My reprieve from the pavement was brief and soon I found myself on an overpass with Route 9 traffic underfoot. From the overpass I descended, and then climbed up a road into and large office park.  The trail description read, "Keep left and in about 100 yards turn right thru landscaping just before office bldg at 175 Crossing Blvd."  Yes, that's all you have to go on at times so it pays to take your time and be observant less you find yourself losing the trail as I have often done. But not today! I ducked through the hedge, down an embankment and onto the Staple's Headquarters Fitness trail. 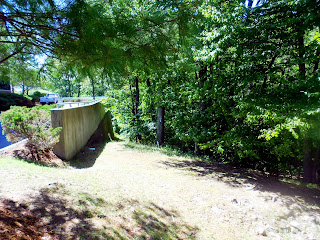 There's a trail in there. Trust me. 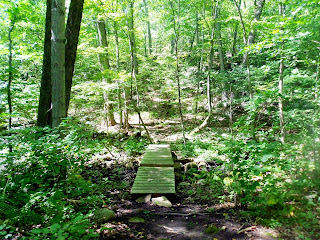 The Staple's trail was about a mile of winding single-track along the bank of a stream. It was very nice hiking and welcomed break from the sun and heat that was building throughout the day. I once again had to cross a major thoroughfare, this time taking the road over Interstate 90. The noise of the Interstate faded as I walked down a quiet back road that would take me to the Ashland Town Forest.  This time there was no difficulty in finding the trail head.  There was a large, but somewhat faded sign indicating its presence. 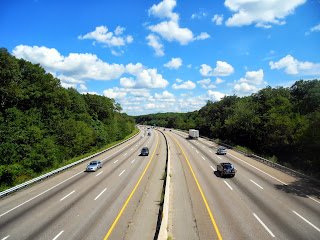 Crossing Interstate 90. A major milestone in my mind. 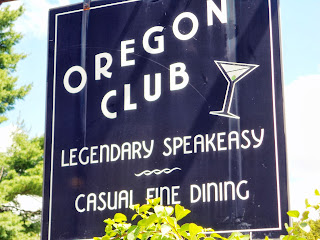 This one is for my friend Bill H.  It's not the Ultra Lounge but it's the best I could do.

The two miles through Ashland Town Forest were very well blazed and I had no problems following the BCT despite the many interconnecting trails. Shortly after entering the woods I reached the 10 mile point in the hike. I then had a revelation that I had not seen one other person in the woods all day. Sure, it was a weekday but I suspect it would be pretty much deserted even on a weekend. If you want solitude, take a hike on the Bay Circuit Trail. 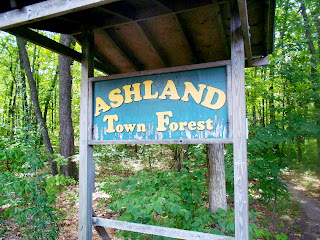 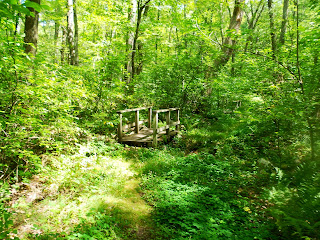 I crossed many of these on the hike.

The final four miles of the hike were almost all road walking with a few short off-road sections. I had been feeling good during the hike but started to run out of steam with two miles to go. My feet were getting sore from all the road walking and my legs were feeling heavy. I realized the one hour walks around my neighborhood in no way prepared my for a five hour hike. I pushed on knowing the hike would end at the Market Basket in Ashland. All I had eaten in the past seven hours was a package of peanut butter cracker and I was famished. 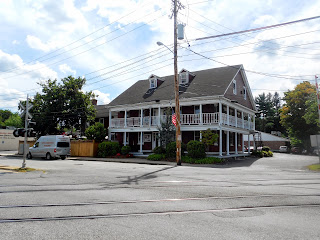 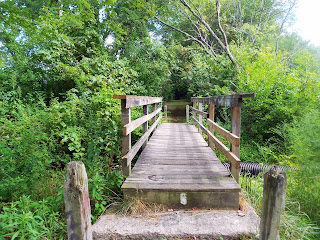 The final footbridge for the day.

Somehow I survived 5 hours and 10 minutes of continuous walking (sounds a lot like my ultra racing) covering 15.5 miles through Framingham, Marlborough, Southborough and Ashland. I had planned to be back on the BCT today and tomorrow for a 40 mile overnight trek but after this hike realized that was too ambitious. I need to do a few more longish day hikes before I can tackle any multi-day adventures.

More pictures and videos from this hike can be found HERE.