On The Path To Recovery?

After running only four times in four months I've finally managed to string together two consecutive weeks of training.  My plantar fasciitis, ITBS and chronic nerve pain are either asymptomatic or at a tolerable pain level at this time.  I don't know how long it will last but I'm going to take advantage of it and run while I can.  I've missed the feel of dirt, rocks and roots beneath my feet.

My first week consisted of four slow, short runs between 3-6 miles each for a weekly total of 15.   I doubled that to 30 miles on week two.  I didn't plan to run so many miles but on my fourth and final run of the week I ran 16 miles on the Skyline trail in Middlesex Fells.  My friend KZ was running the TARC Fells Ultra and I planned to run one loop with him.  Well, you know how this goes.  The weather was nice, the trails in great shape (far better than I), and I got drawn in to running a second, unplanned loop.

I'm going to back off this week and do 3 short runs for a total of 18-20 miles.   It's so easy for me to get carried away and overdo my running.  I have to remember to take it slow and easy for a while until I'm feeling a bit better.  Does running a 50K in three and a half weeks fall under the 'take it easy' category?
Posted by Dan at 8:21 AM 3 comments: 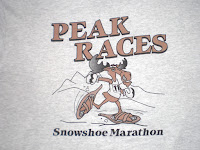 2010 was not a very good year for me.  2011 didn't start out any better.  Injuries and a chronic neck problem kept me from running most of the time.  In fact, I've run only four times in the past four months.  I have managed to get in some winter hiking, mostly on snowshoes, so I haven't been a total couch potato.  Darn close to it though.

So why did I decide to attempt 13.1 miles on snowshoes with no training under my belt?  I don't really know.  Maybe I was just sick and tired of feeling like I wasn't living, just existing. Maybe it was because some of the members of TUG (The Ultra Gang) would be there.  Or maybe it was the delicious breakfast Beth serves at the Liberty Hill Farm Inn.  Whatever the reason, I made the three hour drive to Pittsfield, VT with great anticipation.

Race morning started off with light snow that soon turned to light rain.  Emily, Kevin and I were together for the 1/2 marathon and we soon met Steve who was running the full.  As soon as the race started Steve was running off into the distance. I later learned he PR'ed by over 20 minutes!  Less than a mile into the race I saw Michelle coming down the hill in the opposite direction.  She was the only female to enter the Death Race (5PM Friday to 1PM Saturday) and she finished 2nd overall!  It was a good day for TUG.

The course was a 6.55 mile loop that started off flat or rolling for a half-mile, followed by a three mile uphill slog and a 2.5 mile screaming descent, finishing off with the final half-mile of flat to rolling terrain.  The snow was sugary during the first loop so traction going uphill was not idea.  This made some of the steep climbs more difficult but still manageable.  By the second loop, the rising temperate and constant foot traffic compacted the snow nicely making the going a little easier. 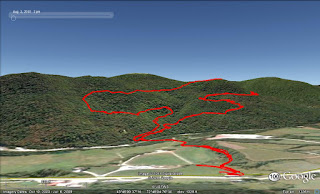 View from the start/finish line. 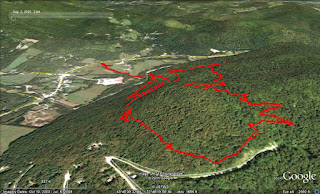 View from the back of the mountain.

One of the many switchback up the mountain side.
Emily, Kevin and myself stuck together during the race and we had a great time. We weren't concerned about our time (at least initially); we just wanted to go the distance. It was only Kevin's second time on snowshoes and he seemed to handle the 13.1 miles with ease.  Emily was her usual happy, smiling self and she found a great way to celebrate her birthday!  I felt pretty good for most of the race except for some knee pain on the steepest downhills.  I know it's my ITB so I'll keep stretching and hope for the best.

After completing the first loop we grabbed something to eat and filled our water bottle before heading out for loop number two.  The pounding I took on the downhills during the first loop was being felt now.  My quads were a bit tired but I still was able to push the uphills.  When we reached the 1800+ foot summit for the second time I knew we had a great shot at running negative splits.  I mentioned this to Emily and Kevin and they were ready to put the hammer down over the last three miles. 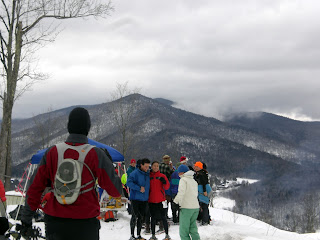 Kevin leads us to the summit aid station. 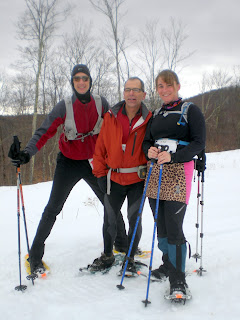 The nice thing about not racing is taking time for photo ops. (photo credit: race volunteer)
We really flew down the mountain and luckily no one took a digger.  My knee was sore but there was no way I was going to slow down.  I'm not sure I could have even if I wanted. Emily and Kevin found another gear and continued to push the final half-mile to the finish line. I struggled to maintain contact but kept them in sight.  I managed to close the gap a bit and finished the second loop about 14 minutes faster than the first. 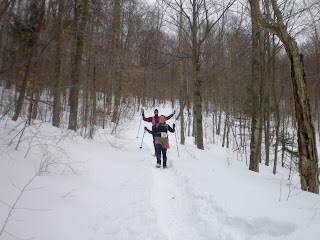 Overall, I was happy with the way the day went.  I was disappointed my ITB acted up.  I thought I would be over that seeing I haven't done much running in the last year.   On the upside, my neck felt OK during and after the run.   Perhaps it's on the mend.  Either way, it's one day at a time.  At this point, I'll take what I can get.