It's been three months since my last hike on the Bay Circuit Trail. I had so much difficulty following the BCT through Sherborn, I wasn't sure if I even wanted to finish the remaining miles on the southern end of the trail. But I've never been one to quit something I start and realized I MUST finish this trail no matter how difficult it may get at times. On Friday, I planned a 13 mile hike on the BCT from Rocky Narrows Reservation in Sherborn to Noon Hill Reservation in Medfield. 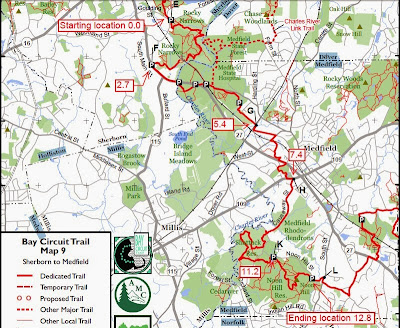 Planned route on the BCT.

When I arrived at the Rocky Narrows Forest Street trail head the parking lot was empty. I was surprised by the amount of snow and ice on the ground. I thought the warmer weather that prevailed earlier in the week would have done a better job of reducing the snow pack. I was wrong. Of course the two inches of snow that fell the evening before didn't help the situation. The gray sky and cold wind did it's best to damper my enthusiasm, and it succeeded to some degree. I was slow to strap on my backpack and after a brief delay I was off. 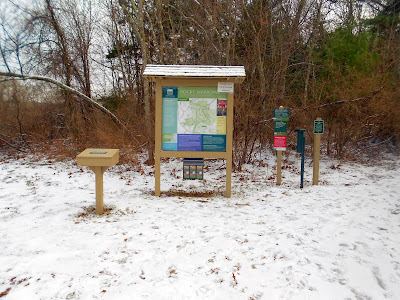 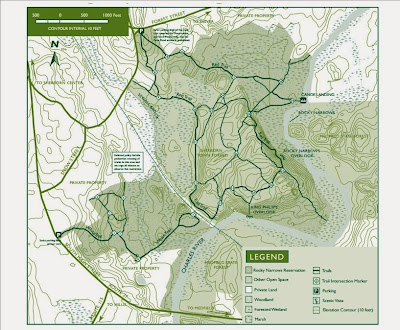 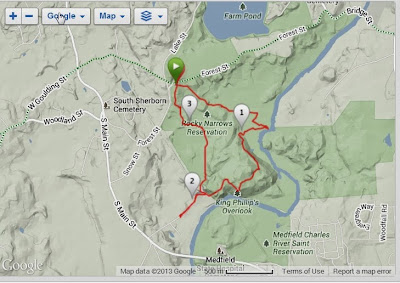 Overview of my route. 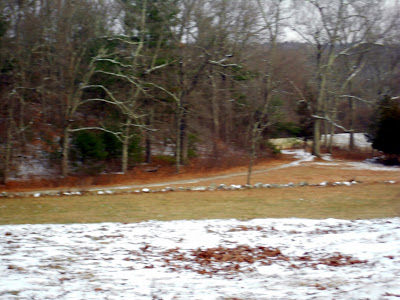 Trail starts to the left of parking lot.

I headed into the woods and met a woman out for a hike with her dog Guido. As we talked a bit, I learned she lived in the area and was a frequent visitor to Rocky Narrows. We discussed our hiking plans for the day and she was happy to tell me what to expect on the trail ahead. We parted for a short time as she took a side trail and I continued on the BCT. We agreed it was likely we would meet again at the canoe launch on the Charles River where the separate trails we were following converged.

I followed the Red Trail to the canoe launch. Most of the trail from the parking lot to the river was covered with a thick layer of bumpy ice. I was thankful I wore my screw shoes but the walking was still slow and slippery at times. I thought walking alone for 13 miles in these conditions wouldn't be much fun so I decided to only explore Rocky Narrows and leave the miles beyond the reservation for another day. Nearing the river, the woods opened and the ice-covered trail changed to soft pine needles. I scanned the Charles looking for river otters but could see none. As I lingered here, Guido walked up to the river followed closely by his owner. 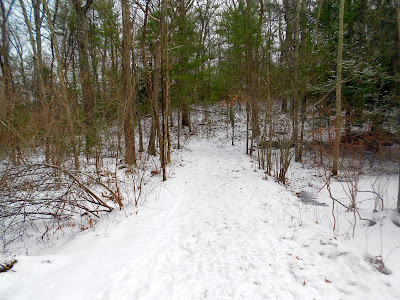 Icy trails made for slow hiking. 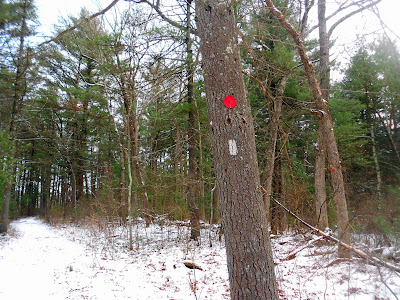 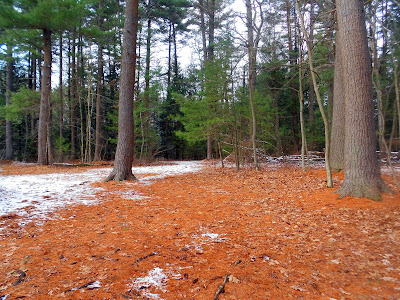 A clearing before reaching the canoe launch beyond the pines. 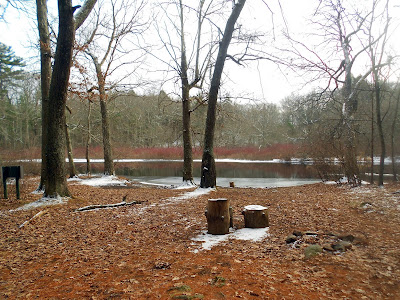 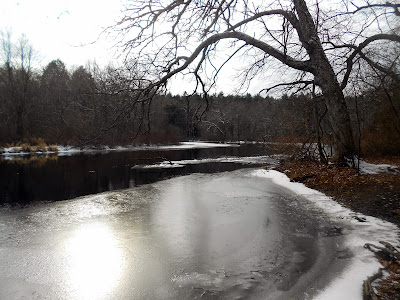 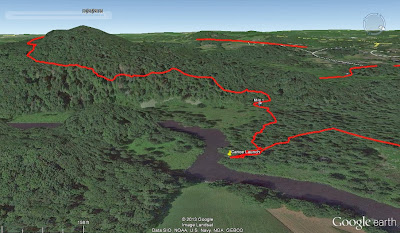 We left the river together and hiked up a steep, rocky trail that was cut precariously close to a sheer cliff. Fortunately, the trail was mostly bare with very little ice and snow. A slip here could be disastrous! I kept my eyes on my feet so I don't know if there were any views here. After 0.4 miles of hard climbing the trail turned away from the cliff face but continued upward another quarter mile to King Phillip's Overlook. From the overlook, I could see Cedar Hill and Mine Hill in Rocky Woods approximately five kilometers to the east. 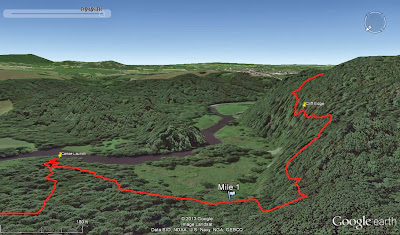 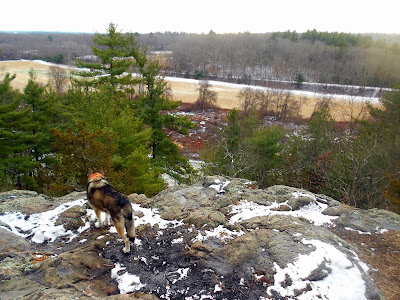 Guido (who is part wolf) takes watch over his domain. 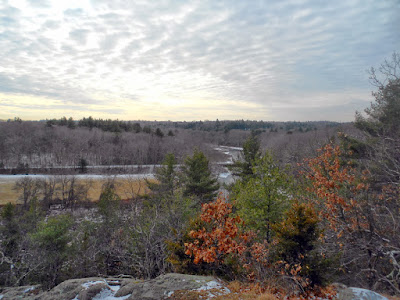 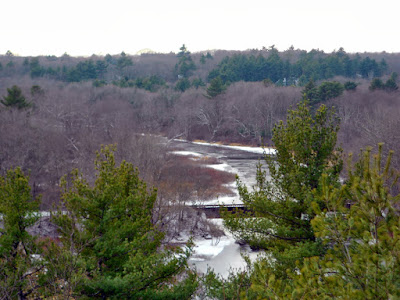 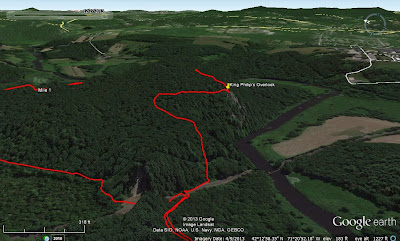 After a steep descent from the overlook the trail briefly runs parallel to an active rail line. There is a trail across the tracks that leads to the Route 27 trail head parking lot. I wanted to take the trail to Rt 27 since it's the trail the BCT follows. My new hiking partner did not, so we decided to go our own ways. Before we separated, she gave me her email address and asked me to message her if I wanted a hiking partner in the future. I thought this was a great idea since I haven't had any luck finding anyone willing to do the BCT with me. I promised to let her know when I would back in the area. When I returned to my car 40 minutes later I could not remember her email address. DOH! 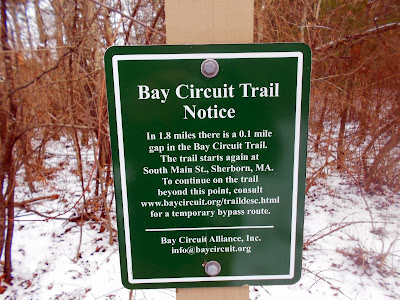 Sign at trail head warns of gap at rail crossing.

I can't tell you if I crossed the tracks or not since it is forbidden by the Trustees of Reservations and CXS Railroad. If I did, I would have to kill you.

I took a lunch break before hiking the final mile to my car. Although my break was brief, I was chilled from sitting on the cold ground. I began moving quickly along the mostly flat trail that skirted what appeared to be a swampy area, but it was hard to tell with the snow on the ground. The trail surface alternated between ice and soft pine needles. Every time I hit an icy patch I was more convinced I made the right decision to cut the hike short. The last quarter mile to my car was uphill but the incline was gradual. Nothing like the earlier cliff walk. Whew!

When I got back to the parking lot, it was full. I'm glad I beat the crowds.

More photos of my hike can been viewed HERE.

Last weekend I went for a short hike in Ravenswood Park with my friend Runnin'Rob. I've been to the park two other times to run The Ravenswood Trail Race but this time I wanted to venture into areas of the park not seen from the race course. Ravenswood is a 600 acre property in Gloucester, MA managed by The Trustees of Reservations. With 10 miles of trails and carriage roads, abandoned quarries and views of the Atlantic from rocky hilltops, there's plenty to explore. 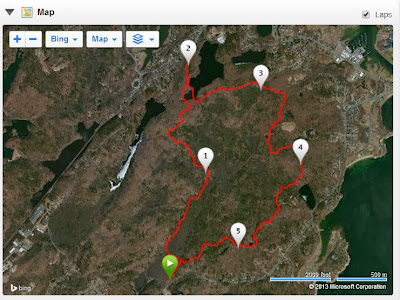 A light snowfall earlier in the week, and the subsequent thawing and refreezing that followed, left several hundred feet of boardwalk over the Great Magnolia Swamp coated in a layer of ice. This made for a treacherous start to the hike but we managed to cross without incident. After the icy beginning, we found ourselves on a rocky and rooty single-track trail skirting the swamp. It was a very cold afternoon but I began to warm up as we gained elevation out of the swamp onto higher ground. 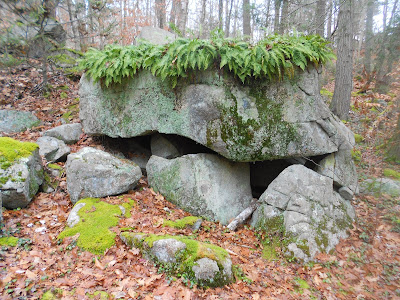 About a mile later we turned onto the Fernwood Lake Trail which loops through the north-west section of the park, past Fernwood Lake (DUH!!) and a large watershed area. The trails in Ravenswood are well marked but somehow I manged to lead us off-trail while we were talking like a couple of giddy teenage girls. This resulted in 15 minute detour but we weren't in any hurry so no harm was done. After losing the trail, Rob took up the lead position and got us back on track. Rob, who is visually impaired, came up with the quote of the day exclaiming, "You know it's bad when the blind guy is leading the way!"  I have to say he did a better job than me. 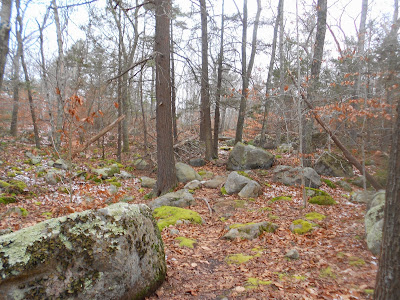 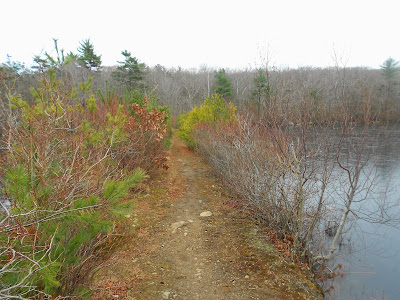 Leaving the lowlands of the Fernwood Lake Trail behind, we began a climb to higher elevation along a ridge on the Ledge Hill Trail. A mountain of jumbled, granite blocks and smooth cliff faces with deep pools on icy water below were evidence the area was once home to a small-scale granite mining operation. When reaching an overlook facing to the east, we decided to take a short break for a snack and some hydration (just water my friends). Although heavily overcast, Eastern Point Lighthouse at the entrance to Gloucester Harbor was visible from our vantage point. 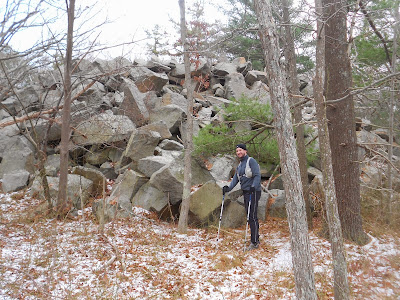 Rob stands next to a mountain of cut granite. 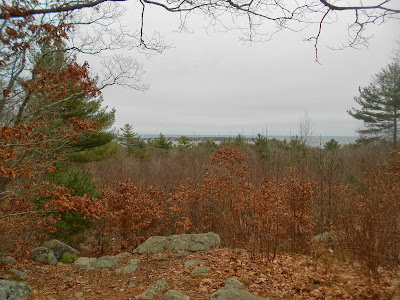 View of the Atlantic from Ledge Hill Trail 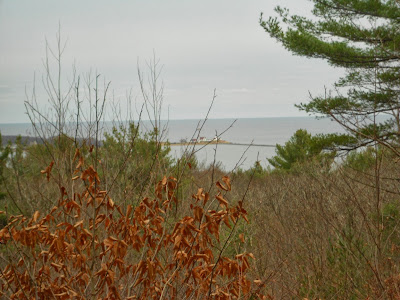 Eastern Point Lighthouse is visible in this zoomed photo.

It was too cold to linger so we decided to get moving again before the chill crept into my tired old bones. Once back to my car at the trail head I checked my Garmin and saw we covered nearly six miles, which surprised me a bit. It didn't seem like we were out very long. I guess hiking with a friend makes all the difference.

Time really does fly when you are having fun!
Posted by Dan at 6:11 PM 1 comment: