I woke up this morning with no motivation and no real plan for the day so I thought I would check out some of the local trails.   A 30 minute drive north brought me to the trail head at Chebacco (rhymes with tobacco) Woods.  It was very humid and a little buggy which didn't help my motivation one bit.   The layout of the interconnecting trails didn't lend themselves to devising a clearly defined loop so I just started walking and let the trail in front of me determine my way. 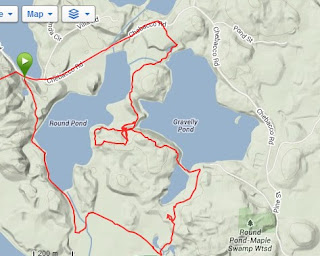 Walking along Round and Gravelly Ponds. 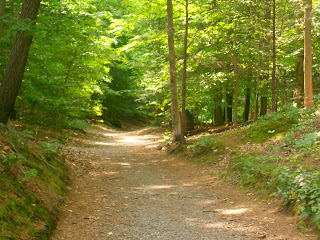 Easy walking most of the way. 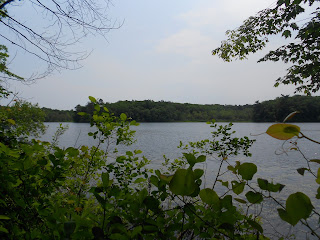 View of Round Pond. 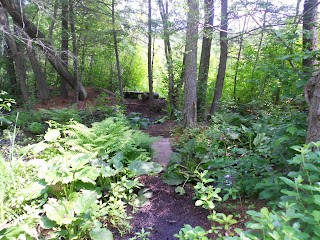 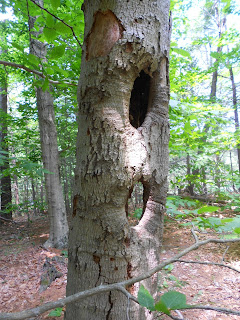 It didn't take long for me to get a little bored with this place.  The terrain was too flat and uninteresting for me to truly enjoy it.  I also think because I was walking aimlessly without a defined goal for the day contributed to my boredom.  If I was hiking to reach a specific destination, or trying to cover a fixed number of miles  for the day, I think I would have been more focused.


A short video of the trails in Chebacco Woods.

Don't get me wrong.  Chebacco Woods is certainly a nice place to visit.  My mind just wasn't in the game today.

More photos of the hike can be viewed here.

Email ThisBlogThis!Share to TwitterShare to FacebookShare to Pinterest
Labels: hikes

The Discover Hamilton Trail (DHT) is a 10 mile loop beginning on Route 1A in Hamilton, MA and passing through Harvard Forest, Pingree Reservation, Bradley Palmer State Park (BPSP), Appleton Farm Grass Rides and Harvard Forest once again.  I first learned of the DHT's existence back in 2008 or 2009 while running the GAC Fat Ass 50K in Bradley Palmer.  Over the next few years I ran on portions of the DHT during training runs in BPSP and during my Bay Circuit Trail adventures. I've always wanted to do the full loop but never got around to it until this past weekend. 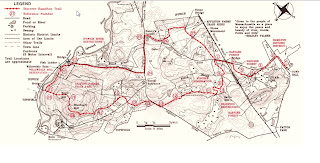 I started my hike at the Hamilton Town Hall and walked north on Route 1A looking for the trail marker that would indicate a turn off the road and into the Harvard Forest.  I searched several minutes for the blaze but could not find it so I decided to do a road walk that paralleled the trail and pick up the actual trail about a mile down the road.  I got a late start and it was beginning to get warm so I was looking forward to getting under some tree cover and into the cooler temperature the woodlands would provide. 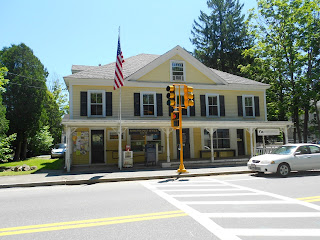 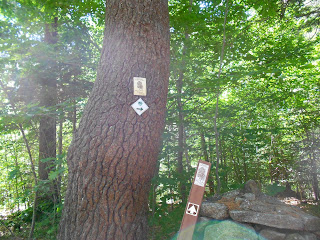 The hiking through Harvard Forest and Pingree Reservation was very pleasant on relatively flat and smooth trails so maintaining a pace of greater than three miles per hour was quite easy. As I stopped briefly to talk to three riders on horseback, a deer crossed my path and ran off into the woods.  I bid farewell the the trio and continued on my way towards BPSP. 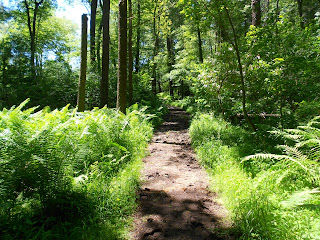 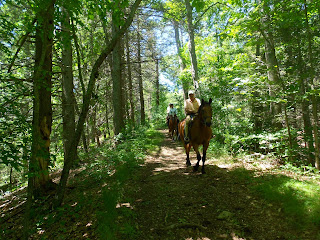 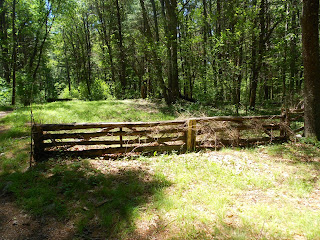 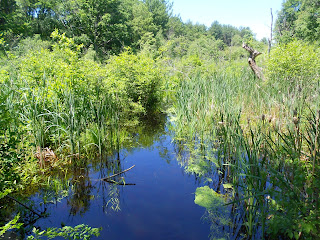 This was a hastily planned hike and all I had for a trail map was the one I found on the internet. It was lacking detail and I should have taken supplemental maps with me, at least one for Bradley Palmer, but I did not.  This proved to be a mistake as I went off the DHT somewhere in BPSP.  By the time I realized my error, I was too far from the missed turn to backtrack and continue on the missed section.  It wasn't a big deal but I did miss the only climb of the hike which would have taken me over Blueberry Hill and Moon Hill. 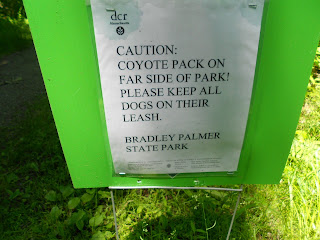 I didn't see any coyote. I wonder if they saw me? 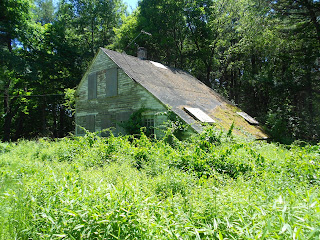 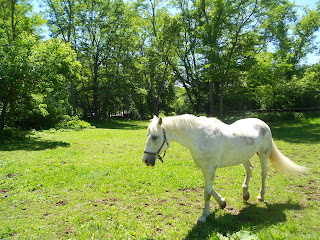 After leaving BPSP I walked along a long dirt road and then onto a paved road past some farmland planted with native corn.  A farmer was working on his tractor in the field under the hot sun.  As I walked past him, I wondered what it would have been like to have lived in a simpler time when people grew and raised what they ate and walking was a common mode of transportation.  My daydreaming came to an abrupt end when a cyclist blurted out something as he whizzed past me.  I don't know what he said but I have a feeling it was something obnoxious.  Road cyclists are like road runners, too obsessed with pace to enjoy the journey. 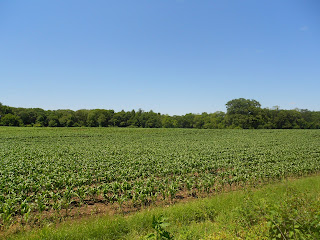 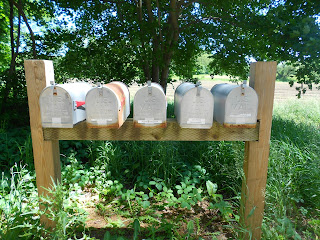 So many mailboxes but it didn't see a single house.

I was happy to leave the hot pavement behind and escape to the green solitude of the Appleton Farm Grass Rides.   The wealthy once rode in their carriages along these rolling paths.  Now, I was enjoy the soft dirt under my feet after the long road walk.  Once I left Appleton, I was less than two miles from the finish.   I entered Harvard Forest to return on the trail that I had missed when I left the Town Hall at the start of my hike. 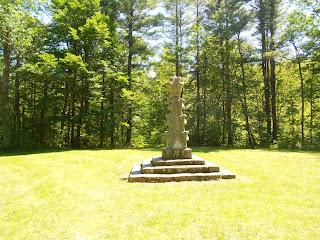 Pinnacle at the intersection of five trails in Appleton.

It was obvious this section of the DHT has seen little use as the trail was rather overgrown and a clear path was not visible.  As the trail descended, it became wet in many spots.  When I crossed a newly constructed footbridge the trail became even wetter and soon it disappeared completely under deep water.  There was a great deal of rain in the area during the week which turned this section of trail into a swampy mess.  There was no way through or around the flooded area so I backtracked and finished up the hike on the same road I had started it. 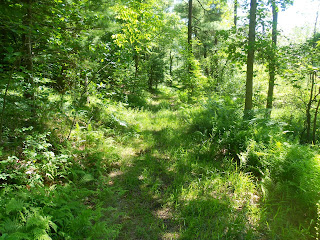 The not so traveled path. 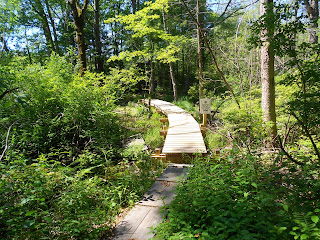 This was nice but didn't help me where I needed it.

With my missed turns and detours the 10 mile hike ended up being closer to 12 miles but who's counting? 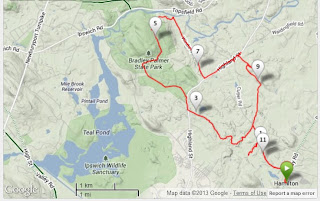 
This video comes to an unplanned end when my camera battery died a few minutes before I ran into the impassable section of trail.