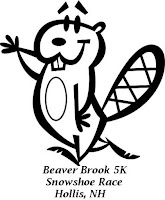 Today, the first race of the 2010 Granite State Snowshoe Series was held in Hollis, NH at Beaver Brook [results]. Snow had fallen throughout the night and into the morning making for excellent trail conditions. I was a little concerned about my general snowshoe conditioning going into this race. I had only done two short snowshoe runs this winter and both of them were pitiful.

I left home with ample time to make it for the 11:30 start. With light snow still falling and slick roads I knew traffic would be moving slower than normal. The drive was going well until I hit a long backup on Rt 3. It was only moving about 20 miles per hour so I guessed there must have been an accident up ahead. Those who have driven with me know I'm not the most patient driver and after two miles of creeping along I was getting annoyed. After another mile of slow going, traffic started to move again.

Pulling into the parking lot I immediately saw the yellow Xterra of Double J. No surprise. Jim races every weekend, sometimes both days. Also there was Steve Wolfe, Scott Graham, Dave Dunham and a host of other speedy guys. After checking in at the registration desk I went out on the snow-covered roads for a warm-up. I had my screw shoes with me so traction wasn't an issue.

After returning from the warm-up I spent some time talking with friend and fellow ultra runner Steve L and a few members of the Dungeon Rock Racing Team before the race started. It was Steve's first snowshoe race and he asked me if he should stop and take some pictures during the race. Steve loves taking pictures and I really enjoy checking out his photos and the hilarious captions he comes up with. I didn't want to discourage him but told him if he stops to take pictures in a race this short he may end up dead last. Yep, he takes A LOT of pictures!

The race started in an open field an immediately went gradually uphill. I had positioned myself in the middle of the pack and was eating snow from the rooster tails kicked up from the runners ahead of me. Fun stuff! After about 150 yards the course made a U-turn onto a wide trail. The field became bottle-necked and I came to a stop for a few seconds. Once rounding the turn there was a little more running room but still everyone was packed in tight. The first half mile was all downhill, not too steep, but a nice gradual grade that made for some easy running. I tried to keep my pace in check here because we would have to run back up this hill to the finish and I wanted to have something left in the tank for the return trip. I started getting frustrated being caught up in the slow pace so I started to run wide off trail so I could pass slower runners. I DID NOT yell "slow runners to the right" (yes, I actually heard someone yell that before!) but instead told the runner ahead of me I was passing to the left (or right) so we wouldn't get tangled up.

I went thought the first mile in 9:11 yet still manage to pass several runners. The second mile was basically flat so I worked on maintaining my 9 minute pace and holding, or improving my position. Not much later, the lead runners were already heading back towards me. Double J was in the lead followed by the above named suspects. It was cool to see everyone coming in the opposite direction even though I then knew how far back I was from the leaders. I continued to pass runners and hit the mile two split in 8:54.

Then the climbing began! By this time the field had thinned out quite a bit and I could only see three people ahead of me. I am a poor uphill runner so I expected to get passed at any moment. I could hear footsteps behind me so I just kept plodding along trying not to slow too much on the climb. The footsteps were getting softer and soon I could not hear them anymore. I actually dropped someone on a hill. A rare and unexpected feat for me.

I passed two of the three people ahead of me (one fell down so that made it easy) and when I reached the third, the finish line was about 200 yards away. I encouraged the other runner to kick it in and he listened. Oh boy did he listen! He took off like he was shot from a cannon. I followed him to the finish and crossed the line in 23 flat (posted as 23:10 in official results). The race was advertized as a 5K but it was least a half mile short. This was the first snowshoe race that I didn't have to walk part of the course and also the first time I was never passed. But it was also the easiest course I have raced so far. I have a feeling this won’t happen again all season.