"I owe my success to having listened respectfully to the very best advice, and then going away and doing the exact opposite." - G. K. Chesterton 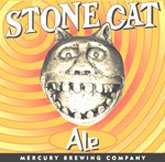 My day began in the early morning darkness. I awoke at 2 AM and had a difficult time returning to sleep. It wasn't that I was nervous about the upcoming race; I was just concerned that it may fall back to sleep and not wake up in an hour as planned. Since I was feeling hungry anyway, I decided to get up and eat a little early. I got the coffee started while I prepared some food for breakfast. I had packed all my gear the previous evening so that there was no need to rush this morning. After finishing breakfast I gathered all my gear and brought it out to my truck. I couldn't believe how much stuff I packed for this marathon! I didn't think I would need everything I had but I would rather have something and not use it than need it and not have it.

It was still very dark at 4:30 when I left for the race. There was a light but steady mist in the air. At least the temperature was pretty mild. I started thinking about all the great weekends we've had in the past two months. Bright sunny skies, with cool temperatures perfect for running. Today would be nothing like that. Driving north on Route 1 virtually alone was in sharp contrast to the daylight hours when tens of thousands of cars pass along this busy stretch of highway. I had a difficult time keeping my eyes open and was yawning constantly. I should have had a second cup of coffee.

I arrived at the Doyon School around 5 AM. Two men in brightly colored vests and waving flashlights were directing traffic. They asked me if I was running the 50 or the marathon. When I told him I was running a marathon I was told I had to drive down the road about a quarter-mile and park at the soccer field. Parking in the school lot was reserved for 50 milers only. The soccer field was pitch black but there were a few other runners gathering their belongings. There was a minivan waiting to shuttle runners back to the school. I hopped into the van with three other runners. It turned out we were all first-timers to Stone Cat and would all be running the marathon distance. We were dropped off at school lot and headed immediately to the gym.

I picked up my race number and was handed a very nice Brooks technical tee shirt. I claimed some floor space along the wall and settled down for a little rest before the race. Stone Cat is as much a reunion as it is a trail race. It was obvious that many people have run this race more than once as they greeted fellow runners like old schoolmates. There was a large contingent of Lynn woods runners as well as other familiar faces from previous trail races. I introduced myself to Ian of Trail Monster Running fame. He's an excellent runner and getting faster all the time. The gym filled quickly and the excitement started to build in preparation for the start of the race. Gilly, the race director gave us some last-minute instructions before we headed out to the starting line. He is certainly a character that lives up to his reputation.

We lined up in the soccer field around 6:15. Darkness had lifted and the mist had almost ended. I wanted to start out slowly so I got near the back of the pack. The command to go was given and the pack slowly moved across the grass field. At the end of the field was a narrow trail head. This created a huge bottleneck as runners tried to funnel their way into the narrow path. My decision to get the back of the pack cost me over two minutes as I had to stand and wait for nearly 300 runners to squeeze their way into the trail. The race course is a 12.5 -mile loop in Willowdale state forest. The 50 mile runners went straight into the woods and to complete four loops. Marathon runners would run two loops. Before the marathon runners could start onto the loop course we were directed to make a sharp left hand turn to first complete a 1.2 mile rectangle route around the front of the school and then back to the soccer field. This was needed to make the race 26.2 miles. 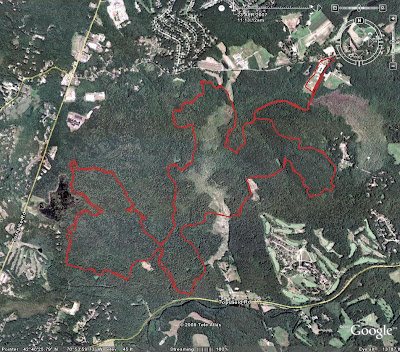 I settled into a steady comfortable pace. The course turned left up a long gradual hill. There was a long line of runners ahead of me making it difficult to pass on the single track trail. I decided to just go with the flow and hang back until the course allowed for easier passing. The course consisted of several miles of twisting, turning single track trails over gently rolling terrain. No major hills but a few good climbs were mixed in to make thing interesting. It was difficult to maintain any rhythm on the single track. The constant zigzag of the trail kept the pace pretty slow. Occasionally the trail opened in onto wide paths where the running was easier. I decided my strategy for the race would be to run harder on the wider trails that tended to be straight and run a slower, steady pace on the narrow single track.

Elevation gain: 2240 feet
About 40 minutes into the race I approached a long straight trail cutting its way across two ponds, one on either side. Recent rains had raised the water level to a point that water was over spilling into the trail. I tried to stay off to the side where the mud was thick and deep. It was nearly impossible to stay dry as my feet kept slipping into the water on the trail. I decided it was ridiculous to try to tip-toe my way across 200 feet of trail since I would lose time and in the end still be wet. After about 20 feet I just started running through the water, passing and splashing runners off to the side. I'm sure this didn't endear me to any of them but what can I say, this is a trail race! With heavy, wet feet I lumbered along wondering if this would cause blisters later on in the race. I continued to click off the miles running a pretty even pace along the way. Around mile 10 I realized I had been running most of the race alone. This sort of amazed me that with 300 people on a 12 mile loop, I would be running alone. Just another long training run!

First loop past very quickly and soon I was entering the soccer field and heading for the start finish line. I checked the finishing clock and noted the time, 2 hours, 13 minutes. At this pace, I definitely had a shot at running 4:30. I walked over to where I had left a drop bag with a towel, a shirt and shorts and Succeed Ultra electrolyte drink. I refilled my hydration pack with the Succeed and debated whether I should change my shirt, socks and shoes. At this point I was drenched from head to toe. A combination of sweat and humid air made me look as if I had taken a swim while out on the course. In the end I just toweled off. I didn't think it would be worth spending all the time to change my clothes knowing I would be running through that long stretch of water again in 40 minutes. I looked back at the clock before I headed off for my second loop. The time was now 2 hours, 15 minutes. I only lost two minutes in transition which wasn't bad.

I was only about 4 miles into the second loop when I started to feel fatigue setting in. My quads were feeling heavy and my hamstrings and calves were tightening up. I also started feeling a little pain in my right knee and my left hip. I think the sharp left and right turns on the tight single track were throwing off my SI joint and causing the hip pain. The knee pain was probably caused by my IT band tightening up. By mile 18 I was really beginning to struggle. I was a little worried knowing I had another 8 miles to go. I got a little energy boost when I hit mile 20. I'm not sure if this was physical or psychological but I felt good for about 2 miles. By mile 22 I was feeling like crap once again. At this point I could barely get my feet off the ground and tripped over a rock and went down hard on my right knee and elbow. No real damage done but it took the wind out of me.

The last 4 miles were very tough. I resorted to many short, swift walking breaks. I tried to calculate what my finishing time would be but mentally I was too fatigued to do the math in my head. I didn't think I had a shot at 4:30 any longer, and finishing became the only goal. Up ahead I saw a runner and a bright orange shirt. I thought if I could keep him in sight he could pull me to the finish. Unfortunately, he was having difficulty and started taking walking breaks as well. To finish this I would be on my own, as well it should be. The last 2 miles passed very slowly and painfully but eventually I was nearing the finish. I felt a sudden burst of energy and started to kick it in. In the distance I could see the finishing clock but it was difficult to make out the numbers. I kept running hard and soon I could read the time. I was a little surprised to see I would break 4:30. After downing 80 oz of Succeed, 10 oz of water, 4 strawberry-banana gels and 2 S-caps along the way, I crossed the finish line in 4:26:59!!
Complete Results Here: 50M & Marathon
Stone Cat Race Photos Courtesy of Emily Trespas: Click Here
This has been a come back year for me. I have overcome injuries and setbacks and made slow, steady progress. Stone Cat has been a year long goal and the culmination of a lot of hard work and determination. I am happy to have finished and thrilled to have broken 4:30. This is not the end, but merely the beginning of a new phase in my training. I will take some time to relish in the accomplishment and to rest my weary body before readying myself for the next challenge. Now that I have a marathon under my belt I'm looking ahead to a 50K (maybe).
If I had followed the advice of some medical specialists, I would not be running right now. So much for years of education, training and practicing medicine. No one knows my body as well as I do, what it is capable of, what pain it can endure and overcome. How much farther can it go?
Stay tuned.....
Posted by Dan at 11:11 PM