Having no experience in running trail marathons, I expected my recovery to be similar to that of the road marathons I ran back in the 80s. Sore quads, hamstrings and calves, difficulty walking down stairs for days and no running for a least one week is what I remember from my road running days. I'm happy to say, that my recovery from Stone Cat has been easier than expected. Of course I was stiff and sore following the race, but the symptoms didn't last for long. I woke up Sunday morning feeling just a little stiffness in my legs. By Monday I was feeling back to normal. Even though I was feeling great on Tuesday I decided to take at least one more day off from running.

I went to Lynn woods Wednesday evening for my first ever night run. I was running late for the scheduled 6 PM start so I didn't have time to gather all my gear. I ran out the door with just a long-sleeved T-shirt and shorts. When I arrived at the parking lot on Great Woods road I saw several cars lined up along the roadway. I was surprised to see there were 15 other runners preparing for the night run. The night air was cold and still and I was way under dressed for the chilly temperature. I was happy we didn't linger long and we were soon off on our run.

Running at night in the darkness of the woods was a new experience for me. It felt a bit bizarre not being able to see beyond the bobbing beam of light in front of me. A windless night and the lack of leaves on the trees contributed to the complete silence in the still of the night. The only sound heard was the crunching of the leaves underfoot. We had only gone about a half-mile when we heard some rustling off into the woods. We stopped and turned our headlamps towards the sound. About 10 feet off the trail we could see a lone deer looking back at us. There we stood runners and deer, neither seemingly willing to move on. I wonder what the deer thought of us standing there in the darkness intruding on his nightly wanderings. After a minute or so the deer moved on, and so did we.

We moved along at a casual pace. There was plenty of conversation to break the silence of the forest. About 2 miles into the run the group began to splinter. Faster runners began to move forward slower runners dropped off while a third group remained in the middle. This continued for about another mile when the lead pack stopped and waited for the stragglers. We continued on our fun run for 2 more miles then climbed up the hill to steel tower. We all stopped to enjoy the view of the Boston skyline illuminating the clear dark sky off into the distance. I began to get chilled standing around in the cold air. Thankfully, we were on our way once again descending a long steep hill down to the parking lot.

I had a great time on my inaugural night run. It felt as if I had never run in Lynn woods even though I had been there many times before. I certainly hope I can make this a weekly event.

This was part training run and part recon mission organized by Kevin for the upcoming Middlesex Fells Ultra trail race in two weeks. The Skyline is a rugged, technical rock and root covered single-track trail comprised of many steep climbs and descents with an elevation gain of approximately 1300 feet over 8 miles. Kevin and I are shooting to complete 3 to 4 loops for a total of 24 to 32 miles on race day. If it ain't hard, it ain't worth doing!

Emily, Paul, Kevin and I met on the Stoneham side of the Fells amidst a steady rain. The plan was to make this a fun, easy run as Emily, Paul and myself were recovering from the marathon and Kevin from 18 miles on the Skyline trail the previous weekend. We started at a trailhead that led us to the Skyline trail. The steady rain had made the going wet and slick. The numerous rocks and roots were covered by a thick layer of wet slippery leaves.

In the beginning we moved at a slow and steady pace all the while engaged in conversations ranging from, training, racing, our jobs and the economy. Paul is a very fast runner and a top finisher at races so I was worried he would be bored running with a middle of the pack runner like me but he seemed content to plod along with us tortoises. We stopped at some of the higher summits to take in the views but most were obscured with the thick, low cloud cover.

On one steep descent I slipped on a wet granite face and fell about a foot to the ground. The impact of landing with locked knees was transferred directly to my lower back and it stiffened immediately. Emily also had a difficult time on this section slipping and landing on her butt. She got up quickly and when asked if she was ok replied, “Yes, I know how to fall”. I need to take a lesson or two from her. Kevin and Paul were more sure-footed and negotiated the rocks without incident.

A short time later on a twisting single-track section Kevin and I starting cranking up the pace trying to generate some body heat. We had gotten chilled while standing around at the stone tower a few minutes earlier. We were moving quickly when I made a bad foot plant and turned my ankle inward. I got a sharp pain in my lower ankle and across the lateral portion of my foot. I slowed up but continued to move forward. The pain dissipated somewhat but never went away. I had the same issue with my lower back. It continued to stiffen up for the remainder of the run. Nothing like trashing yourself on a casual training run!

Kevin did a great job of navigation until we hit the sheep fold parking area about one mile from the finish of the run. The trail was not clearly marked here and we weren’t sure which way to go. We got onto a green marked trail (skyline is white) but it was heading in our intended direction so we followed it to see where it would take us. After cresting a hill we came to a water storage tank. Next to the tank was a stone tower with a metal spiral staircase running up the center. Kevin sprinted up the steps and we all followed. I’m not sure how tall the tower was but we were very high up. It was a shame the weather was not in our favor. I’m sure there must be some awesome views of the surrounding area from this tower. I plan to come back on a clear day to get a better look.

We scurried back down the tower and continued on our way. We descended a short steep hill onto a dirt road and back to the parking area where our adventure began. Emily took some time to show me some material she selected for my custom made gaiters. After looking at all the fabrics I decided to go with the orange and black zebra pattern. These gaiters will be super cool. You won’t miss me out on the trails when I wearing these bad boys!!

After having lunch with Kevin I went home to ice my back and foot. I did this a couple of times throughout the day but it didn’t seem to help much. I hope this doesn’t affect my training for long. I have big plans for the coming two months. 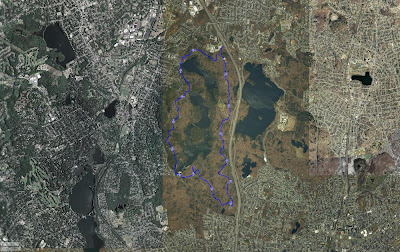 I woke up this morning and my lower back was still stiff. My foot felt better but I still iced both after have a little breakfast. I should have gone over the town track for a short run so as not to aggravate the injury any further. That would have been the smart thing to do. But smart is not an adjective often used to describe me. The trails have me in their spell and off to Breakheart I went. What can I say?

I had no real plan for this run so I decided to see if I could scope out some single- track over in the Camp Nihan section of the reservation. I am planning to hold a 10 mile trail race at Breakheart in the early spring or fall of 2009. It will be a fundraiser for the Saugus River Watershed Council and I intend to donate all the net proceeds to this great organization. I have the race course all mapped out but I continue to modify it trying incorporate as much single and double track trail as possible.

Making my way across the footbridge that spans the Saugus River I turned quickly into the woods on a slightly concealed trail. This trail skirted its way along the bank of the river and will make a fitting addition to the course. I think it will also add a little distance to the race by replacing a straighter section of double-track farther from the river.

On my way back to the ranger station I rolled my ankle on a root and got a stabbing pain in the foot I tweaked yesterday. Even though it felt ok this morning it’s obviously a more serious injury than I first suspected. I really should have stayed off the trails today and given it another day to heal. Lesson learned! I’ll ice it and wear an ankle support for the next week and see how it heals. No way am I missing out on the Fells race. 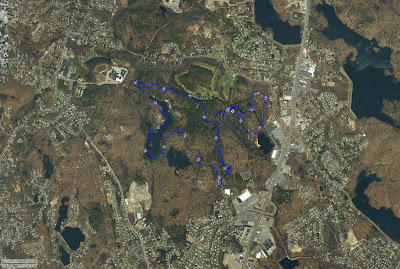