This past Saturday I ventured back to the Middlesex Fells reservation to scope out the Skyline trail once again. I wanted to get another look at the course I will be running in one week at The Fells Trail Races. My plan for the day was to complete two loops of the Skyline trail. The first loop would be run in a clockwise direction and the second one counterclockwise. This would give me a sense of which direction is “easier” if there is such a thing on this trail. Kevin would be joining me once again for the two loops. My friend Mary was taking a break from the roads and willing to get her shoes dirty by running the first loop with us.

I picked up Kevin at the T station and we drove over to the Sheepfold parking lot. Mary was already there waiting for us. The sun was shining brightly but it was a very cold morning with temps in the low 20s. The wind was gusting making it feel more like it was in the teens. As Kevin gathered his gear together I stepped outside to talk to Mary. The wind immediately cut through my light-weight tee shirt. I was definitely under dressed for a day like today. I went back inside the truck and changed into a long-sleeved Techwick shirt that is great for cold weather running. 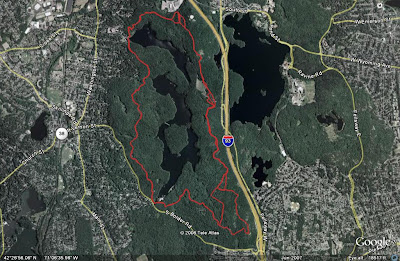 We headed south from the Sheepfold parking lot down to the Reservoir trail which connects to Skyline. Heading in a southerly direction from the lot the trail begins to climb in the first half mile. I feel the southern half of the reservation is the more difficult because it seems to have more elevation changes. Unlike last weekend, the trail was dry and very hard. The previous week’s rain had frozen the soil causing frost heaves in the ground. When you stepped on one of these heaves they would sometimes collapse making for treacherous footing. There were also patches of ice in the shady locations just to make things interesting.

It became evident fairly quickly that following the trail would not be easy. Without any leaves on the trees or vegetation on the ground the forest floor was varying shades of brown. Following the trail as it weaved through trees and over rocks was a difficult task. Each of us took turns leading the way and leading the other two off trail as well. Each of us missed a turn in the first mile alone. This would be the theme of the day and it continued throughout the entire run.

We had been running for about 20 minutes when the trail started to look familiar to me. I didn't really think much of it at the time and continued on. Soon, and much to the surprise of us all, we were back at the Sheepfold lot. Somewhere along the way we unknowingly missed a turn and got completely turned around. We had reversed direction ran back to our starting point completing a 2.5 mile loop. Far short of the 7-8 miles we were expecting. We laughed when we realize our error, although I don't think any of us thought it was particularly funny. We then made a decision to continue heading north and running the first loop in a counterclockwise direction.


Picking up the trail from this point was difficult. The trail cut across the road, passed through a small wooded section and then opened up into another parking lot. From there it cut into a grass field and onto a paved road. We followed the paved road a short distance as the trail then turned right, and back into the woods. As we climbed the first rocky section we were met by several large unleashed dogs coming down the trail. Fortunately, they were totally uninterested in us and we ran past them without incident. The dog owners weren’t very friendly either and also ignored us.


The wind was not gusting as fiercely in the lower elevations or through thickly forested areas but it was still very cold. Staying warm was only possible while moving so we continued to work our way around the reservation at a moderate pace. Around 8 miles we crested the hill to Wright’s Tower. We stopped here for a short break to refuel and enjoy the views. Here we were exposed to the constant wind and I could feel my body temperature dropping. The entrance to the tower offered some protection from the wind so we huddled there for a short time. It looked like this was a popular hangout for all types of trail trawlers. While Mary, Kevin and I enjoyed Succeed and Roctane, there was evidence that others before us preferred Red Bull and reefer! I wonder if that combination speeds you up or slows you down? I’m sure I’ll never know. 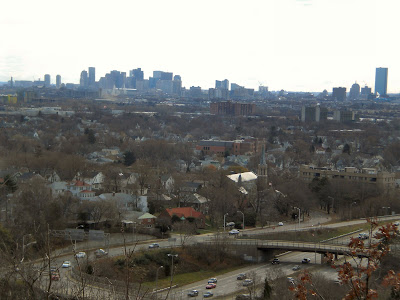 Boston in the background 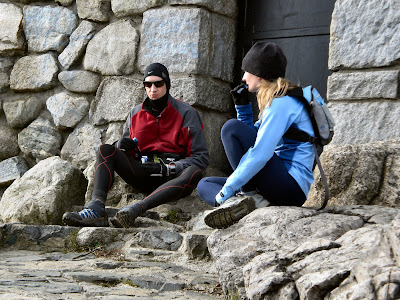 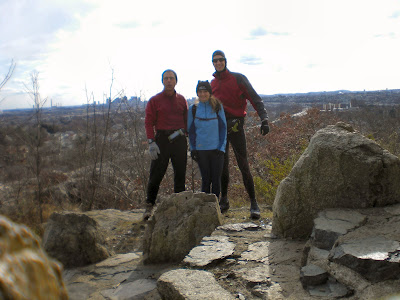 Kevin, on the other hand was rejuvenated by his blueberry-pomegranate (yuck) gel, or maybe he just wanted to get warm because he sped off after our rest stop with refreshed legs. Mary and I followed close behind. Well, Mary was a lot closer to him than me! The pace quickened the next 2 miles as Mary and Kevin swapped the lead. I know Mary just wanted out of there (she had lots of homework to do) but I don’t know what was going on with Kevin. I just held on and tried to keep them in sight. Wait a minute! Both of them had the blu-pom and I had the tri-berry Gu. Hmm, maybe I need to rethink my flavor choices. Anyway, these 2 miles flew by and soon we were back to the Sheepfold lot. 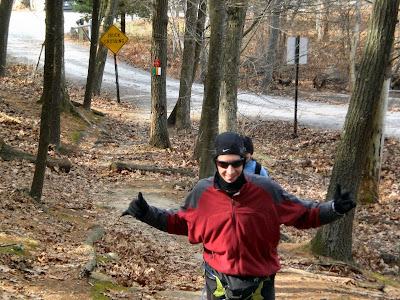 Kevin having too much fun 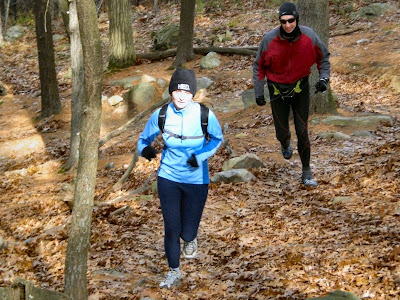 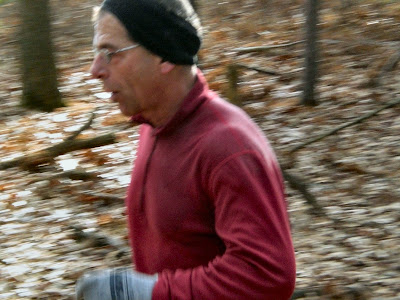 Faster than a speeding bullet...HA!
Mary hopped in her Beetle and drove off (lucky her) while Kevin and I sought shelter from the wind in my truck. I ran the heater to warm us up a little before we ventured out for another loop. Kevin ate an Odwalla powerfood bar and I refilled my water bottles. Kevin ate a banana and I changed into a dry shirt. Kevin ate some more and I waited. Kevin ate some more and….Dude, where are you putting all that??? Kevin eventually finished his five course meal and was ready for another loop. Just messing with you Kev!

The second loop started out pretty much like the first, I got us lost! Kevin was leading and then let me go by to do the scouting. I seemed to be doing fine finding the faded white blazes but then realized I hadn’t seen one in a while. I was ready to go back but Kevin thought we should just continue on the same trail since it was heading in the same general direction. I was glad I listened to him as it turned out we missed the trail that would have taken us back to Wright’s tower. It was too cold and windy up there anyway.

Once we picked up the Skyline trail again we took turns leading the way since it can be mentally exhausting trying to find the trail in a sea of brown. About half way through the loop Kevin somehow tweaked his knee and it was starting to be an issue for him. I took over lead duty after that so he could focus on his footing without having to look for trail markers. Even with his knee problem we maintained a steady pace throughout the final miles.

The sun was getting lower in the sky, and the wind was still whipping along, making it feel colder than the first loop. By now I was really getting hungry and started thinking about food, real food. I was sick of gels. We passed the time over the next few miles talking about what we would have for lunch. Earlier in the run I was craving pancakes. Three hours in the cold had changed my mind. I was now thinking soup. We started joking about the Badwater movie and the “Where’s my f---ing soup” crisis. We were both happy to see the parking lot for the third time knowing we would be out of the cold and eating soon.

After running the trail in opposite directions neither Kevin nor myself could decide which way is easier. Both directions have some challenging climb and descents so it doesn’t seem to matter how you run the trail. Kevin did make an observation that made sense to me. Run the southern half first because the trail is more technical and it “feels” like there is more climbing at that end on the reservation. This knowledge will be useful when we both attempt to tackle 4 loops (32 miles) at the Fell Trail Race this coming Saturday. I really need to find another sport.