Trouncing Trails with the Trail Animals

I skipped another snowshoe race this weekend but it gave me an opportunity to meet up with the Trail Animals for their weekly TARC run. I’ve been thinking about joining in on one of these Blue Hills runs for months but the 7am start time usually scared me away. Trail Animal extraordinaire, Bob Crowley decided to move the runs to 8am to encourage more participation and it must have worked. 15 wild creatures decided to leave the comfort of home for a frolic in the frigid air.

Bob was starting out an hour earlier by running hill repeats up to the Observatory Station atop 635 foot high Great Blue Hill. Knowing I’m in serious need of hill work and knowing Mish, Kev and Steve would be there, I decided to bite the bullet, get up early and head for the hills. The climb to the Observatory is on a paved road approximately 0.9 miles long. The climb is constant and steep in some sections so there’s really no place to ‘rest’ on the way up. I worked the up hills fairly hard but not all out. I knew I had another 16 miles of hard running after this. I took it easy on the downhill not wanting to torture my PF any more than necessary. Thankfully, we only had time for two sets but it was plenty for my first hill session. I’ll be back for more. Sure beats the dreadmill! 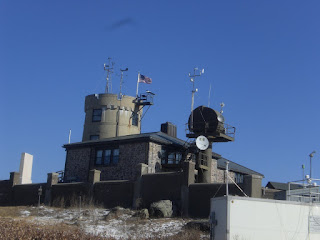 After the short drive to Houghton’s Pond we met up with several more animals and headed off into the woods. I didn’t know any of the other runners there and they didn’t seem to know one another either. That didn’t matter to any of us. We were all assembled there because we all shared the same passion for running rugged trails under any conditions. Bob led the way and we followed like baby cubs. I think he was the only one in the group the really knew the trails well. Blue Hills is a large park and the trail system is a bit confusing so it pays to have a leader. 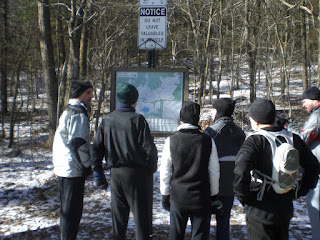 This is a fine mess you've gotten us into. (Episode of Lost)

Most of the trails were covered with a thin layer of snow. Some sections were icy, some were bare. Overall conditions were good and I didn’t use any traction devices. I don’t think there were any spills which is always good especially on rocky trails. After an hour of running half of the group decided to return to the cars for various reasons. Seven others, including myself decided to press on. I was looking to get four hours on my feet so I was just getting warmed up. Since none of us knew where we were going we stayed on the Skyline trail. It’s the best marked trail with large blue rectangle blazes. It’s also the most difficult many with rocky climbs and descents but also great views of the surrounding area. 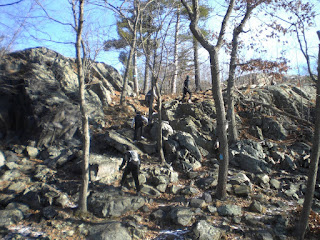 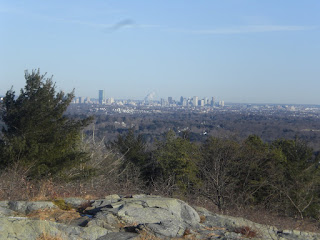 I'd rather be here than there.

Three of the faster runners led the way while four of the slower one (that’s me) followed. They were good enough to wait up for us so we wouldn’t get lost. Actually, we could keep up with them on the flats (of which there were little) and the descents. They were strong climbers though and it was hard to maintain contact with them on the up hills. At the top of one climb the four tortoises stopped for a five minute break to soak up the sun on a warm ridge. We joked that we would never see the speedy hares again. Much to our surprise they were waiting for us a few hundred yards down the trail. 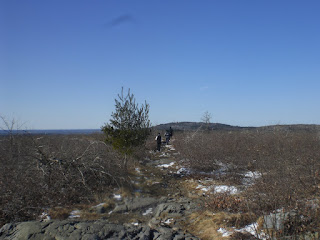 Too fast for this old man.

When we neared the parking lot three more runners dropped while four of us pressed on to climb Great Blue Hill to the weather station. We ran into some very icy trails where an ice axe and crampons would have come in handy. Steve mentioned Streph would have liked this section. We thought it safer to detour through the woods and avoid the ice flow. Once we reached the station we headed back in the same direction. It was much too cold to stand around in the wind at that elevation. 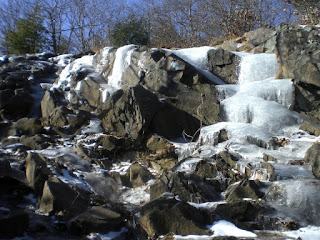 Ice axe and crampons would have helped on this trail.

After a slow and careful descent on the icy trail we were back to the parking lot and our cars. After about 5-10 minutes of conversation we retreated to our vehicles for some warmth. It was a very enjoyable run and I got to meet several new animals in the process. I’m going to try to get out to Blue Hills more often for these run. The terrain is much more challenging than my usual stomping grounds and running long with a group makes short order of the many miles. 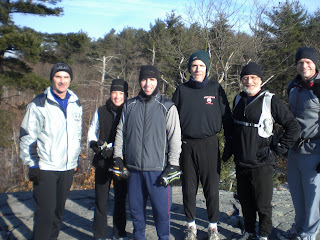 Still smiles after many miles.