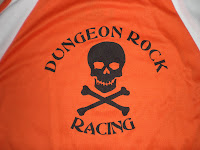 I was asked recently if I would like to become a member of the newly formed Dungeon Rock Racing (DRR) Snowshoe Team to which I gratefully accepted. Last winter I had expressed an interest in snowshow racing to one of the founding members of DRR. I never was able to race last year because of my injuries but this year I agreed to represent the team in at least three races in the Granite State Snowshoe Race Series. I'm looking forward to the fun and rewards of team racing. It's been many years since I've been involved with one.

A little history lesson from Dan C. Last year a core group of North Shore athletes participated in both WMAC's snowshoe series and Acidotic's new snowshoe series. Acidotic's series included a "team" category for each race and for the overall series. As most of the current DRR team members were, and still are... extremely loyal to their respective teams and clubs (Team Comprehensive, Wicked Running, North Shore Striders, WMAC, etc.) we failed to recognize the potential benefit of combining our crazy band into one North Shore snowshoe "team". So after placing 2nd, 4th, and 5th (various teams) in the final standings we decided to create Dungeon Rock Racing, named after the famed location in our beloved Lynn Woods. In a nutshell, DRR is simply "team" racing/training for the love of snowshoeing. There is no membership fee; we don't have board officers, time qualifying standards, etc. What we will ask of you if you are interested in racing for the DRR Snowshoe team is that:

* You participate in at least one formal snowshoe event (WMAC, Acidotic, etc.) during the season (December - March).
* As a rep of DRR you behave in a sportsman(woman) like fashion at all times offering support and encouragement to all participants regardless of skill or perceived ability.
* You extend the utmost respect to the respective race director, respect and thank volunteers, and follow all rules/regulations as indicated; and it should go without saying, you have fun!