Water, Ice and another trip to the ER

I haven’t been doing much running the past few weeks. I injured my ankle at the Fells Trail Race in November and had to take some time off. After taking one week of complete rest I did a few short runs the following week for a total of 15 miles. This down time will probably keep me from attempting a 50K in January. I’ll have to wait a bit for my next Ultra.

I went for a short run in Breakheart Reservation on Sunday morning. I was a cold, windy morning but the sun was shining so it wasn’t all bad. We had a very heavy rainstorm all day Friday and the effects were seen on the trails. There was a lot of water in the low areas and the many small brooks and streams were overflowing. The water was running high so I avoided the trails that run along the banks of the river.

About 20 minutes into my run I came upon the first major obstacle on the Saugus River trail. Usually I can make this small water crossing without getting my feet wet. There are many boulders that make good stepping stones across the brook. On Sunday’s run the water level was much higher due to the storm and most of the rocks were submerged.

There were a few rocks barely above the surface of the swift running water. Although they appeared to be wet from spray, at least I could keep my feet dry by using them to leap-frog my way across. I didn’t realize the wet appearance was actually a very thin coat of ice. I jumped onto one and my foot slipped causing me to lose my balance. I reached out to break my fall and my finger got jammed between two rocks.

I got to the other side, wet and feeling some pain in my 4th finger. I continued to run but the pain in my finger wasn’t subsiding. I stopped and took off my glove to get a look at it. The finger was bent inward from the 2nd knuckle and upward from the 1st knuckle. I didn’t think it was broken but I definitely though it was dislocated. I tried to pop the tip segment back into the joint but could budge it. I decided I better turn back and have it checked out by a medical professional.

I drove to the Emergency Department at the Melrose-Wakefield Hospital. My second trip in two weeks. Believe me, it’s not a place I like to spend my weekends! Three x-rays and three hours later it was confirmed to be a dislocation, nothing broken. The ER doc injected my finger with a local anesthesia, pushed and twisted my knuckle a few times and I was good to go. I have to wear a split on my finger for three weeks but at least it isn’t anything that will keep me from running. Now if I can only stay out of here for the rest of the year! 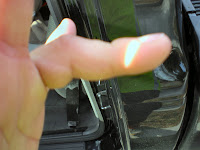 It looked much worse in person. 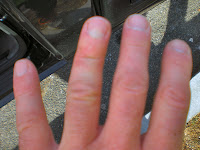 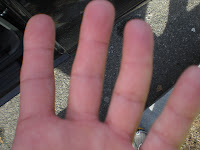 I would worry this could effect my typing and hence my blog postings but I can't really type any slower than I already do. Can I?