Stone Cat Marathon Race Report - My Race From The Rear, Or How Running A Personal Worst Can Be So Rewarding. 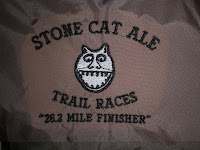 For those that know me, this hasn't been a great year for me running-wise.  I've been dealing with a very stubborn IT band that has kept me from training much during the past six months.  When I registered for Stone Cat a few months ago I thought I would be over this injury come November.  Well, race day arrived and my ITB was still misbehaving but this was one race I refused to record as a DNS [Did Not Start].


Having done little to no training in the months preceding the race (12 miles per week average with one long run of 15 mile) I decided to start the race at a very conservative pace, as in walking.  This would serve two purposes.  First, it would allow me to loosen up my IT band and hopefully prevent, or at least delay, it tightening up and causing knee pain.  Second, it would allow me to spend some time catching up with Trail Pixie.  She also has been injured and was going to walk the entire 26.2 miles.  Or so she said. Funny how pre-race plans often change in the heat of battle.  (She walked all but seven miles and still finished in six hours!)

After taking a ten minute detour due to a road closure, I arrived at the school gym to pick up my race number.  It was still early and I had plenty of time to talk with several good folks from the Lynn Woods Crew and The Ultra Gang.  I spent most of my time with Karen G who was running her first 50.  I think she had some pre-race jitters but hid it well. Turns out she had nothing to worry about and completed the 50 mile race feeling fine and enjoying the company of owls. Seeing so many familiar faces is another reason why Stone Cat is one of my favorite races. 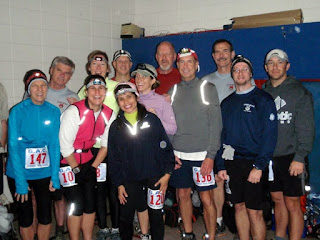 Some of the Lynn Woods Crew (photo credit: Team T.) 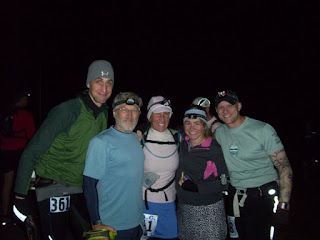 A few of The Ultra Gang before the start. (photo credit: Streph T.)

As we walked into the cold darkness for the start of the race I drifted to the back of the pack.  I was getting cold standing around and wanted to get moving.  I never heard the "Go" command but when the crowd in front of me starting to move I knew the race was on.  Emily was not nearby but I caught up to her when runners starting stacking up trying to go from the open field into the first single track section. 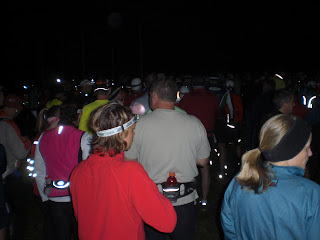 Minutes before the start.

Emily and I walked together for the first 20-25 minutes as runners drifted away into the woods, the small specks of light from their headlamps bobbing in the darkness.﻿ Emily is a very fast walker and I had to work to keep up. I didn't feel like we were losing that much time to the runners who had to deal with wet, slippery rocks , roots and leaves with very little light.  Once I felt like I was adequately warmed up I said goodbye to Emily and began to run slowly.

Because I started dead last, or close to it, there were about 300 people ahead of me.  It was fun catching up to runners, chatting with them for a while, and then moving on to chase down the next group. Because much of this race in on single track trails there were many times when I could not pass as quickly as I wanted and had to run the pace dictated by the lead runner.  I think this helped me in the long run since it kept me at an easy pace for the first half of the race. 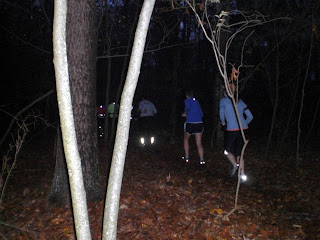 Chasing after the early morning train.

As I made my way through the first loop I got a chance to run with many friends.  Although my stay with them was brief in most cases, it helped the first loop pass quickly. I also had a great time grazing at the two aid stations on the course.  When I arrived at Al Cat' Lounge it was still very early in the morning so I decided to have breakfast.  I looked for the pancakes but couldn't find them. I settled for bacon.  It was so good I grabbed four more strips and continued on my way.  It was the first time I ate bacon during a race but it won't be my last. 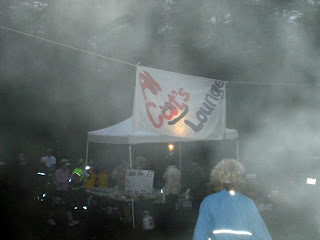 There was a section of trail between two swampy ponds that was mostly under water.  Many runners tried to keep to the side of the trail to stay dry but I knew from my previous runs here that it was a waste of time.  It slows you down quite a bit and you end up getting wet feet in the end.  I just blasted through the river of water as quickly as I could so I would not prolong the suffering.  In all honesty, I actually liked running in the water even though it was very cold. 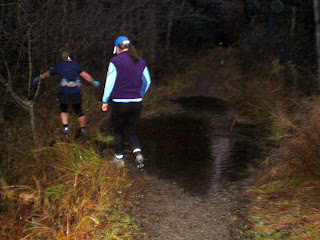 What are you afraid of? It's only water people! 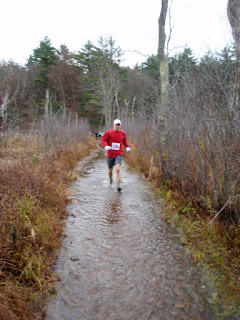 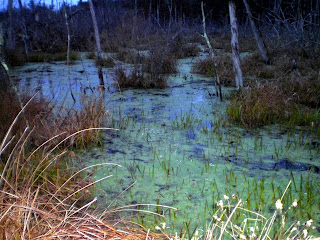 This made me think of green smoothies but I'm sure they taste better than they look.

I finished the first loop feeling very Strong and after some chicken noodle soup I headed back out for the final 12.5 miles. By now, the field of runners had spread out and I ran alone for long stretches at a time.  Along one of my favorites sections of single track Ben Nephew came hammering by me and was out of sight in a flash.  He went on the set the 50 mile course record in a very fast 6:24:47.  A short time later, someone behind me asked if I was Dan.  It was Josh Katzmam (second place overall) who I know by name but we had never met.  He told me he checks out my blog occasionally and I told him I was aiming to run his race in VT next summer.  His stride was gazelle-like and soon, he too, was gone from view. 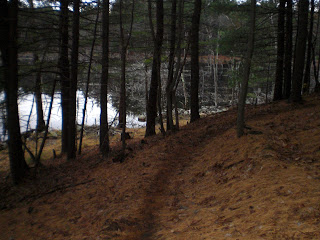 Lapped by Ben Nephew soon after taking this photo. 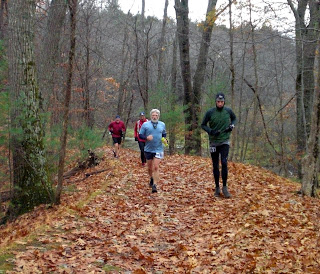 I was expecting my IT band to bother me at some point but I guess my walking warm up did the trick . I didn't have any issues and it felt fine the entire race.  What I didn't expect was a return of my plantar fasciitis which had been in check for the past few months.  But at mile 15, I started to feel pain in both feet.  My left foot wasn't too bad but the right foot got worse with each passing mile.  By mile 20 my right foot was very painful and it was effecting my stride.  I tried running different ways, landing on my heels, mid-foot and toes but nothing helped.  I just had to suck it up to the finish.  By the time I made it back to the school with the finish line in sight, I was hobbling like an old man.  Well, I'm sort of old so it was kind of fitting that I finish the race looking like one.

At 5:03:08 it was by far, my slowest marathon ever but I was not disappointed.  In fact, this was one of the most satisfying finishes I've ever had.   First, I never expected to race again this year because of my injury. It was awesome to run with the gang again.  Once I did made it to the starting line, I thought I would struggle with the distance due to lack of training.  That never happened either.  Although I slowed over the last 2 or 3 miles I felt very good during the race. Finishing Stone Cat definitely rescued me from a very bad year.  For that, I am most grateful.