TARC Summer 12 Hour Race Report - Back To The Drawing Board

First off let me say that the TARC 12 Hour Run in Medfield MA was an awesome race.  Co-RDs Chris and Josh and all of the race volunteers did an amazing job and were as supportive, friendly and helpful as any I have met in my years of running ultras.  Josh was so supportive, he would have convinced me to continue to run another loop even though I felt like a pile of poo.  The only thing that kept me from continuing was a family commitment that necessitated an early exit from the race.  Thanks for trying Josh.


The second point I'd like to make is this race confirmed what I had been thinking about since running Wakely Dam last month.  My minimalist training just isn't cutting it any more.  Looking over my training log for 2011 revealed how little running I've actually done in the past 32 weeks.  My total so far this year is a paltry 565 miles.  If I back out the 120 miles covered in the four long races/runs I've done, that drops the total to 445.  That's a weekly average of about 14 miles per week!  That training can get me through marathon distance but I suffer greatly once I cross that threshold.  I think it's time to come up with a new plan if I want to continue running ultras.

OK,  now a little bit about the race itself.

The race course was a convoluted loop on the Trustees of Reservation property know as Noon Hill.  Although the course looked confusing on paper, it was very clearly marked and easy to follow.   Many people dislike loop courses for long races but I don't mind them if they aren't too short and the terrain is varied.  The TARC loop was approximately 6.3 miles long with technical and smooth trail sections and a moderate amount of elevation so I never felt bored during my 6+ hours of running.  I never felt good either. 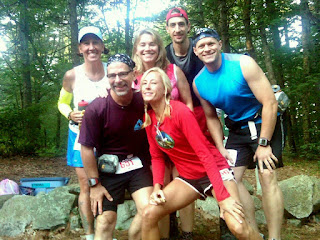 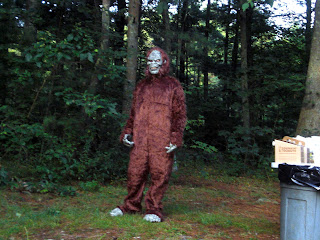 TARC mascot.  "What you looking at?" 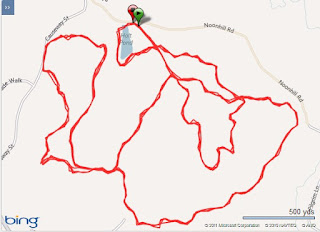 A long climb up 370 foot Noon Hill on right.  The view was not worth the climb. 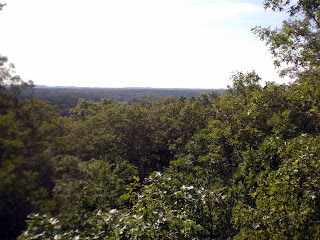 I started out by walking the first 15 minutes with Emily and Steve.  This has become somewhat of a tradition since doing this at Stone Cat last year with Em.  It's a good way to warm up and catch up with friends I don't see very often.   During this time I met fellow Blogger "Run Home" Pam from CT.  I've been reading her blog for a couple of years now and it was cool to meet her in person.  I also met two other online friends Wendy and Mark, who were very nice.  But then again, aren't all ultra runners?

It didn't take long for me to figure out i was going to have a bad day.  I stubbed my toe, tripping about five times ON THE FIRST LOOP!  This is something that usually happens to me in the later stages of a race when I am fatigued.  The trend continued throughout the day until I finally went flying through the air like superman, landing prone on the trail.  I hadn't noticed how humid it was before the race but now I was sweating profusely. Humidity is my kryptonite.  I knew I was in trouble.  The fall just proved it. 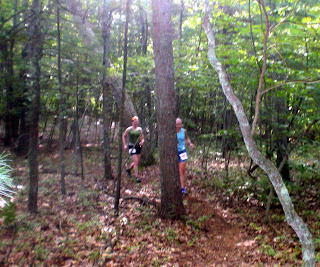 These two cute chicks chased me all day. 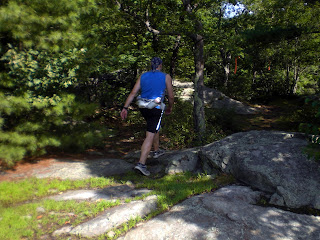 And I chased this big dude until he dropped me like a bad habit.  I think he finished in second place.  Was it my whining that made you run so fast?

Steve and I finished the first loop under 1:30 which was just about where I wanted to be.  That turned out to be my fastest of four loops even with the 15 minutes of walking in the beginning.   It's funny because I felt like I was moving much faster on the second loop but that too was about five minutes slower than the first.   My slowest loop was around 1:44.  I guess you could say the wheels came off after loop number one.  I'd like to blame the humidity but I believe the lack of any serious training had finally caught up to me.

So, now I'm standing at the crossroads.  Do I continue to run ultras with insufficient training, suffering at every race and running ever slower finishing times?  Do I find the time to train more, spending less time on other things I like to do?  Or, do I stick with minimal training, avoid ultras and run shorter races like those on the Grand Tree and North Shore Trail Race Series?

Decisions, decisions.
Posted by Dan at 10:34 AM