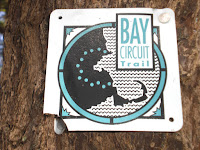 Conventional wisdom and common sense would call for a runner to gradually increase mileage after a long layoff or returning from an injury.  I recently told an ultra running friend of mine to take it slow and easy even though she wanted to pump up the distance of her runs.  I should have listened to my own advice as a nagging ITB injury would come back to bite me on my run along the Bay Circuit Trail. After a four month hiatus from running I have logged long runs of 6, 16 and 18 miles during my first three weeks of running.  Not too bright.

I have never run the Bay Circuit Trail but I had RunninRob as my trail guide for the day.  He has logged many miles along this section of the BCT, even at night. We started our trek in Bradley Palmer State Park in Topsfield, wandered through Willowdale Forest in Ipswich and reached our turnaround point in Rowley where we refilled our water bottles at Rob's apartment before returning along the same route. The route was mostly flat but the terrain varied enough to make it an enjoyable run. 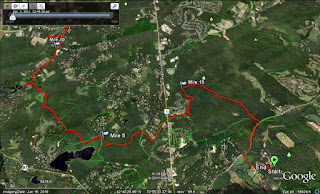 Flat but fun.
Evidently, Willowdale did not get the word that spring has arrived.  When we crossed the road into the forest we immediately encountered snow and ice on the trail.  There were many sections that were snow covered and others will low hanging or broken tree limbs. 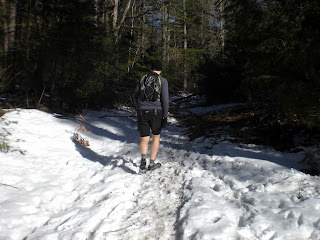 Good opportunity for a walking break.
The only other obstacle we faced was a washed out section of trail due to beaver activity in the area.  We attempted to build a walkway over the water with downed tree branches but eventually gave up and took a detour around the swollen pond. 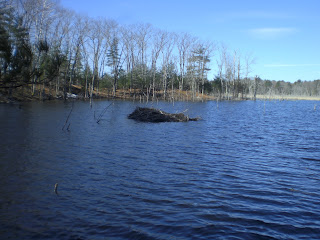 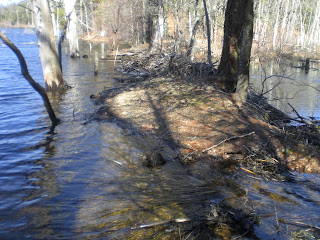 There should be a trail here. 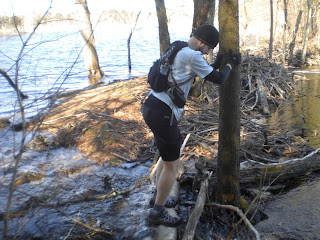 Rob crossing our first homemade bridge.
It was a great day to be out on the trail.  The air was cool, the sky was blue and the sun was shinning brightly.  Rob and I were so happy to be running we started to get a little goofy.

After I shot this video I started to get some knee pain brought on by my chronic ITBFS.  I manged to hobble for the remaining 45 minutes and made it back to Bradley Palmer.  When we sat down to refuel and rehydrate I was pleased to see I had drawn my first blood of the season. 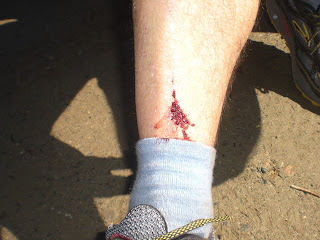 I didn't feel a thing.
Now it's time to rest, stretch and ice this annoying IT band.  I'm not sure if I'll be able to go the full 50K in few weeks but I'm certainly going to give it my best shot.  I'm my own worst enemy.
Good times :)
More photos of our BCT run can be viewed HERE.
Posted by Dan at 9:43 AM